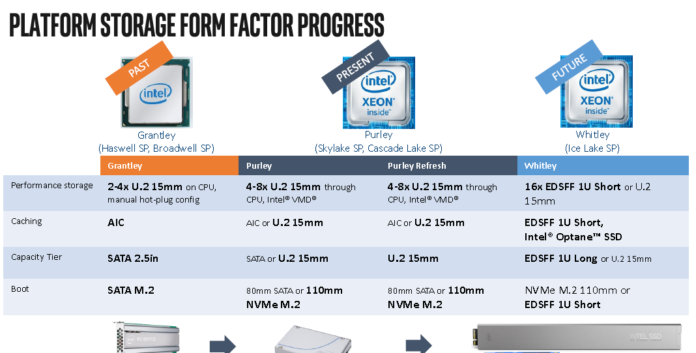 The competition between Intel and AMD seems to be heating up. In some sources, some allegations have been made about Intel’s expected Whitley platform. Does what is suggested about Intel’s new product, which is expected to stand out by increasing up to 100%, remain realistic? Who will be the winner of the duo competing on performance this time?

According to new information about Intel’s upcoming Whitley platform, the server platform seems to have some impressive results. Produced with a 10 nm processor, the Whitley server platform will come after Purley and will migrate Intel’s server ecosystem to 10 nm. Based on these criteria, users are definitely expected to see a huge increase in performance compared to older generation Xeon parts.

Based on Intel’s Sunny Cove architecture, Ice Lake CPUs were expected to show great gains in the performance and power efficiency of the company’s CPU architecture. Although the company has already accustomed users to the idea that Sunny Cove will be revolutionary, the comprehensive version of this appeared for the first time. Let us remind you that Intel’s current server-side platform is called Purley and the platform that will support Purley’s running Ice Lake chip is called Whitley here.

When we look at the big RAM array and Microsoft Server OS side, it seems that the part in question is a 12-core / 24-thread processor and places this processor at the lower end of the Ice Lake SP array. Another point we can notice is that the CPU has a 2.7 GHz turbo. This is much less than the clock speeds that modern Intel processors reach, but clock speeds are known to be a prototype and will definitely increase after testing.

There will be a big increase in performance
The performance of the new CPU is at a point that surprises those who see it. The Intel Whitley Ice Lake SP CPU sample is reported to receive a multicore score of about 28,000 points. This means performance that is almost twice the previous Purley platform core. It is also commented that Jim Keller, who Intel took from AMD and added to his body, continued to show his talents like an architectural wizard.

If the resulting information and comparisons are a remote indicator of the final product, we can say that Intel did not give up its claim about 10 nm processors. However, the precise results will become clear by user comments. We will continue to share new news with you.

Video that lets us take a closer look at the BMW...

Lenovo’s Yoga series two computers are on the market!