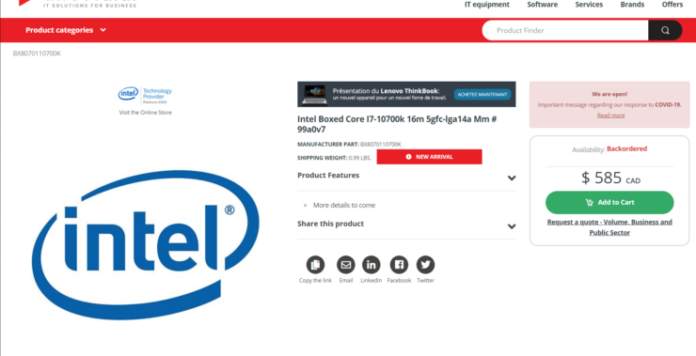 Intel will release Comet Lake series products, which are 10th generation processors this year. The prices of these processors are already taking place on retail sites. Prices are not much different than expected.

Intel, which has been the undisputed leader of the processor market for a long time, has managed to maintain its leadership in recent years, but it has gained serious market share especially to AMD. The company’s new product in competition with the Ryzen series is the 10th generation Comet Lake processors.

The price of the Core i9-9900 went on sale at a similar price last year. The latest benchmark tests revealed that the chip was consuming too much power and getting too hot. In other words, it does not seem possible to maintain high speeds for a long time.

The rival of this processor will be AMD Ryzen 9 3900X. This processor has 12 cores and 24 threads, while its price was lower. In terms of price, AMD seems to be a better choice.

This processor provides much higher performance than the 9th generation i7-9700K it replaces. The Ryzen 7 3800X has lower speeds but a lower price. The Ryzen 7 3700X, on the other hand, offers a close performance even though it is cheaper.

The processor, which has a performance of 4.7 GHz in a single core, is 4.8 GHz. In terms of performance, Core i7-10700, which has similar features with Core i7-10700K, has a more affordable price. On the other hand, Ryzen 7 3700X stands out with its free design difference, which has better performance and is not found in 10th generation 65W processors.

Generally speaking, these prices seem to be close to reality, albeit slightly higher than official sales figures. What do you think about new processors? If you gathered a desktop computer today, which one would you choose?

A ransomware has been discovered that disables your antivirus