Home Tech Intel A770 GPU got price and release date 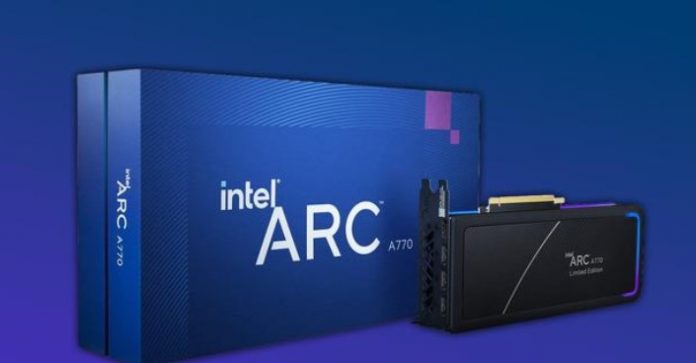 Intel’s latest announcements about its new suite have finally resulted in the much-discussed Intel Arc GPUs, the A770 and A750, finally getting a date and price.

After several weeks of speculation, videos discussing various maps and a large number of graphs, it seems that Intel is finally ready to introduce new Arc GPUs to the world.

We have not only a release date, but also some starting prices for the long-awaited Intel GPUs.

Intel A770 GPU is coming soon

Although the A380 has been on sale for some time, we just now found out the prices and release dates of Intel’s flagship cards, the A770 and A750. From October 12, at a price of $329, Intel will release its top-end GPU to consumers.

At the advertising and marketing stage, Intel compared its flagship with Nvidia’s budget variant, the RTX 3060, which caused several surprises.

RTX 3060, although a powerful and really good card, appeared two years ago. It looks like Intel still wants to solve this problem, despite the fact that the 4060 is just around the corner.

Oddly enough, Intel seems to be targeting ray tracing performance in many of its marketing schedules, which budget builds won’t take into account in the future.

The main problem with Intel GPUs at the moment is that they don’t have much support for older games outside of the DirectX 12 infrastructure, and they’re coming out just as AMD and Nvidia are updating their cards.

However, we fully expect Intel GPUs to continue to rise as Nvidia card prices remain unchanged after the drop and people are anticipating the upcoming Radeon upgrade with RDNA 3. fair fight after all.

BioWare wants to ensure the compatibility of the mods