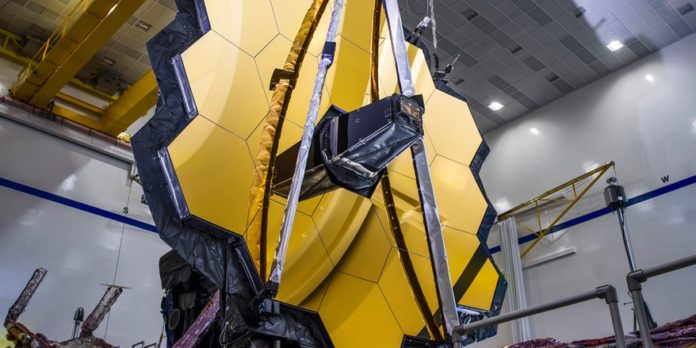 Video of the installation of the golden mirror of NASA’s new spacecraft James Webb Space Telescope, which will be launched in the coming period, has been released. The gold mirror, which will be sent to space with a rocket, has been folded up so that it can fit in the rocket.

In a recent test, the installation of the 6.5-meter main mirror of the James Webb Space Telescope was tested. The golden mirror, the largest telescope mirror ever built by NASA, has been successfully installed and opened to be in space.

During the test, the golden mirror was connected to special gravity balancing equipment that simulates the zero gravity environment in space. In this way, the golden mirror took its true shape as designed and showed that it was ready for the space environment. Now NASA’s engineers and technicians will try the mirror once again before sending it to the place where the telescope will be promoted.

The golden mirror is the most critical part of the James Webb Space Telescope. The magnitudes of the mirrors determine the sensitivity of the telescopes, the amount of light that they can collect directly from what they observe. For the James Webb Space Telescope to have the highest level of precision, the gold mirror was made in a gigantic dimension.

The main mirror of the James Webb Space Telescope is so large that it doesn’t fit in the rocket it will be sent to in space. NASA engineers have therefore developed the mirror in a collapsible way. The main mirror, folded into the rocket, will reopen in space and take on the shape it should be.