Home Tech Instagram has stated that it is sharing our exact location in Stories:... 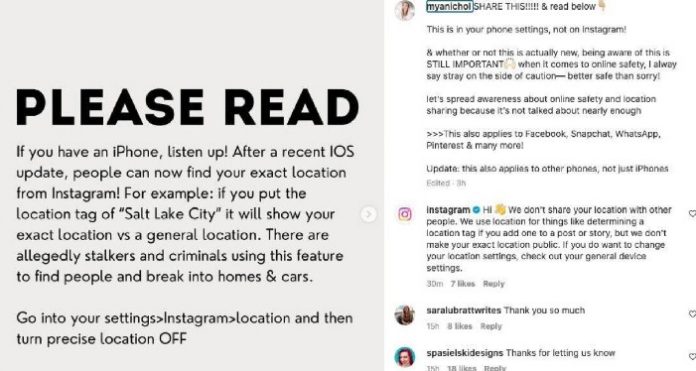 The post, which went viral on Instagram, talked about stories containing location information. The lawsuit stated that Instagram shares the exact location of iPhone users who posted stories with other subscribers. The giant platform has rejected these unfounded accusations.

The popular social media platform Instagram, which operates under the auspices of Meta, often comes to the fore with the new features it adds. However, some of the posts circulating on the platform have gone viral, which makes some interesting statements about Instagram.

The post, which spread on the platform and received thousands of comments and likes, claimed that Instagram shared the exact location of its users who share stories with other people. After this statement, not based on facts, caused great controversy, Instagram was forced to make a statement and say that there was no such thing. Let’s look at the details.

The Instagram post, which has received hundreds of thousands of likes and comments, reported that the platform informs people of our exact location when we share stories. It was also stated that this happened to iPhone users after the new iOS update.

If we give an example; Presumably when you add a location tag (like Istanbul) to a story, Insagram shares your exact location with your followers, rather than sharing it as a shared location. The report even says that the criminals used it to find people and get to houses and cars, which further strengthens the charges.

The statement does not correspond to reality.

No matter how disturbing these statements may be, they do not correspond to reality. Apple has not made any changes to the exchange of location data with the update. So we can say that this is impossible. Instagram also denied the accusations in the comment under the post and used the following statements:

“We don’t share your location with others. We use location when you add a location tag to a post or story; however, we do not publish your exact location. If you want to change your location settings, you can do so in the settings section of your device.”

If you want to change your location settings; By selecting the “Privacy” option in the “Settings” section of your iPhone, you can access the “Geolocation Services” on the screen that opens, and from there select the desired application and change the settings.