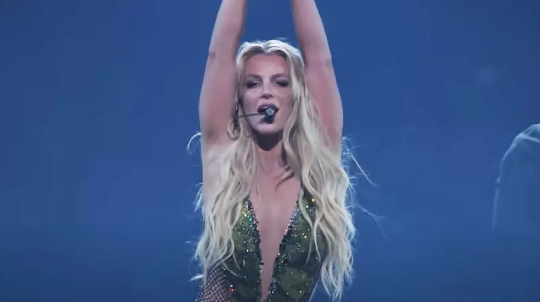 There are some celebrities who stick to a very narrow track on Instagram. The vast majority of them publish a certain type of content and/or use a certain tone, and almost everything we see follows this format. Not Britney Spears. The beloved singer, who received full access to her social media accounts after conservation, is surprisingly frank in her communication with fans, and her content touches on many topics. Sometimes she talks about her past and about broken relationships with family members. Sometimes she talks about social networks themselves. Sometimes she posts photos in varying degrees of undress. Or, in the case of yesterday, sometimes she combines it all into one post.

On Tuesday, Spears posted a series of photos and videos from a shower in Mexico on Instagram. She is currently on vacation with her husband Sam Asgari, and she left four posts after a two-hour shower session. In the one below, she included a photo along with a caption that referred to the fact that Instagram does not allow people to post their bodies, as well as cross the border with Mexico. She also commented that she is now allowed to drink coffee, and invited her estranged mother to have coffee to “talk about it.” You can read the post below…

Britney Spears’ relationship with her family members is, to put it mildly, complicated. She was placed in custody back in 2008 after several public incidents and hospitalizations. Her father Jamie Spears was appointed her guardian in a role he retained until 2019. The guardianship was later dissolved, and Spears spoke openly about how much anger and resentment she feels towards her father for controlling her. He, on the other hand, was insistent that guardianship was necessary.

She also expressed great anger at her mother Lynn Spears for supporting custody and not speaking out, even though her mom disagrees with that assessment. The pop star also accused her mother of beating her. The matriarch of the Spears family has apologized publicly several times and repeatedly insisted that she wants her daughter to be happy, although, as with most family disputes, there are many different versions of events.

In recent weeks, Spears has shown a possible openness to reuniting with her family. She posted a thoughtful tribute to her sister Jamie Lynn Spears, and now she’s opened her mother’s door a little. Obviously, to be clear, there is definitely a slight undertone in the post related to the fact that she can’t drink coffee and then asks her to bring coffee, but at least from my point of view, it seems that the door is half open.

Instagram is unclear what Spears’ fans might think, because she recently disabled comments on her Instagram page. She didn’t give any explanation why, but if you’ve ever spent any time in her comments section, it’s pretty clear. Conspiracy theories that she was posting old content or content from her old home, and that this might mean she was not in charge of her account, have been rampant. Add to that how many fans will openly question her decisions, and the result is a very toxic environment. Let’s hope that without this negativity and a potentially open door for reconciliation with his family, the pop music legend is preparing for a wonderful 2023.

Red Dead Redemption 2: This Is Crazy Mod Integrated Into Twitch...

Danny DeVito Gave a + Answer about Whether he will Be...