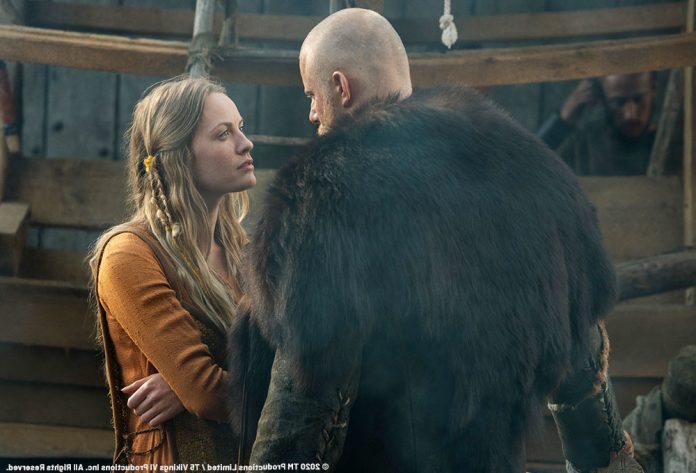 Ingrid (Lucy Martin) surprised viewers in the latest Vikings installment, which arrived in its entirety on December 30, 2020 on the Amazon Prime Video platform. In season six, part B, fans found out how Ingrid had been a powerful witch, who asked the gods for help.

Because she takes revenge on Erik (Eric Johnson) this is why Vikings fans are eager to know why Ingrid became the queen of Kattegat in the final moments of Vikings. Recall that Ingrid was introduced in the first half of the sixth season as a citizen of Kattegat who caught the attention of the King, Bjorn Ironside (Alexander Ludwig).

However, Bjorn had already married the squire maiden Gunnhild (Ragga Ragnars), and had noticed her husband’s affection for Ingrid. On the other hand, Gunnhild caught Bjorn and Ingrid together, and in order to keep her husband happy, she agreed that Ingrid could become Bjorn’s second wife.

At the end of the first half of the Vikings season, King Harald (Peter Franzén) showed interest in Ingrid and ended up raping her. So in the second half of the season, Vikings fans began to discover how Ingrid was more powerful than she had initially hinted at.

Believing that she was pregnant with Bjorn, she decided to present him for the role of the next ruler of Kattegat so Ingrid taking advantage of it performed a spell that would help her win the title, and it was then that Vikings fans learned of her dark powers. .

Not long after her supernatural abilities were known, Erik pursued her, who was also hungry for power due to this in order to get him out of the way. Ingrid performed another ritual, asking the gods to blind Erik.

See Also
Vikings: why the creator ended the series?

As Erik’s eyesight began to deteriorate, so did his authority in Kattegat, and Ingrid began to earn the respect of other leaders in the area. At the end of the Vikings series, she had devised a shocking plan with one of the slaves she had met.

The pair conspired to kill Erik when he least expected it, and Ingrid’s slave friend was able to stab him with a gallows. In the wake of Erik’s death in Vikings, Ingrid took the crown, and the series ended with the citizens of Kattegat yelling:

Chanyeol and Raiden release Yours, their new song