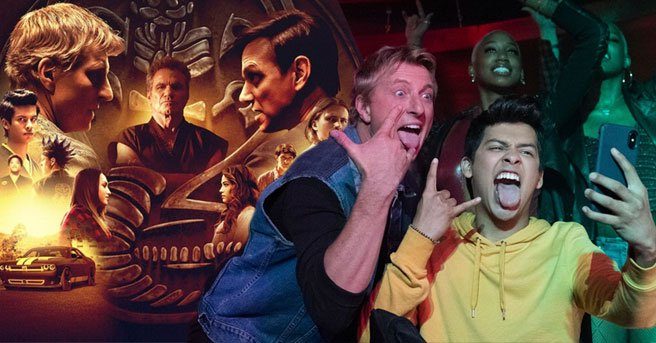 The Netflix streaming platform delivered the new episodes of the third season to Cobra Kai fans on January 1, 2021, which had been waiting for about 1 year.

As season 3 of Cobra Kai is available on Netflix, there is already news about the fourth installment of the series, and fans are eagerly awaiting the return.

Due to the lockdown generated by the coronavirus pandemic, the fourth season of Cobra Kai has not started filming. However, it is scheduled to begin in the first quarter of 2021.

Recall that last October, co-creator Jon Hurwitz tweeted to fans saying that the end of the writing of the next scripts, was already done. This is what he shared at the time:

“Last day of the writers room of season 4. 14 weeks with some of my favorite people in the world. The scripts are coming. Excited, we will have everything written and polished by the time we start filming. It will be another season! ”

Also, during an interview conducted by the site Popculture.com, co-creator Josh Heald explained how the coronavirus pandemic changed Cobra Kai’s plans for 2021. This said:

“We are planning to do season 4 in 2021. COVID has changed everyone’s plans to start productions. But we hope to do it in early 2021. We will be in production. We just keep our heads down and make sure the story makes sense and the scripts are solid and we start when everything looks good to us. ”

At the end of the third season of Cobra Kai, fans watched as Daniel LaRusso and Johnny Lawrence team up to defeat the villain John Kreese in the fourth installment of the series.

See Also
Everything we know about season 4 of the series

In Cobra Kai, while Hawk has joined the side of his friends, Miguel, Sam, Demitri, the trio Tori, Robby and Kyler remain on the opposite side.

Regarding whether Cobra Kai will make it past season four, Jon Hurwitz responded during the same interview that fans will have more on-screen kicks and punches for a long time. This was shared by the showrunner:

“We have plans for several more seasons. When we started writing season 1, we had a clear idea of ​​where we wanted things to end, but we never knew exactly how long it would take to get there. … We wrote season 4, or almost. We have ideas for a sequel, and that will be a discussion to have with Netflix. “