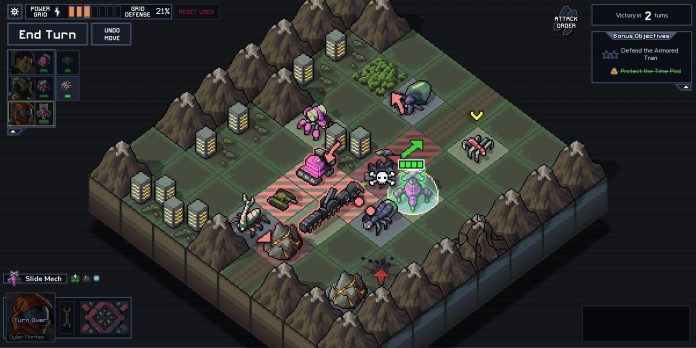 Four years after its launch, Into the Breach still has a lot to offer thanks to random challenges and mod support. Now the new update will provide veteran players with even more weapons and pilots with which they can save humanity.

Subset Games is known for its challenging and unique strategy games, and its breakthrough hit FTL: Faster Than Light in 2012 attracted the attention of many. The critically acclaimed game Into the Breach is similar to a complex one, but switches to a turn-based strategy from the FTL gameplay in real time.

The free Advanced Edition update for Into the Breach follows a format similar to the FTL Extended Edition and is based on the principles of expanding gameplay in non-invasive ways. In particular, several new units, weapons, pilots and enemies are being added. Given the game’s interesting approach to movement and physical presence in turn-based strategy, the new units are likely to provide even more ways to push enemies around the map.

Advanced Edition is far from the only announcement. In the Breach will also be available on mobile devices from July 19, but only for Netflix subscribers. Having a strategy game like Into the Breach on a mobile device is a great choice, but blocking it for a subscription service may disappoint fans of Subset Games who are not yet subscribed to Netflix. However, its presence on the service can introduce the game to a completely new audience, which in the long run can benefit it.

Along with the announcement of the Advanced Edition, Subset Games also announced that Into the Breach will finally have a physical edition via Fangamer. Given the disproportionately small number of indie games that are released on physical media, joining Into the Breach to those that are released even four years after release is a testament to its resilience, probably partly due to randomized levels and a unique approach to strategy. The physical version of Into the Breach will even include a physical manual, which is rare in modern games due to digital manuals or dependence on in-game manuals.

Not everything about Into the Breach: Advanced Edition has been revealed yet, but when the update comes out, it will be a great reason to return to the game, much like FTL gained a second life thanks to the Advanced Edition. Tactical strategy games have been occupying a niche lately, but they still have a lot to offer players who want to learn how to play them well.

Into the Breach is available for mobile devices, PCs and switches. The expanded edition is released on July 19.