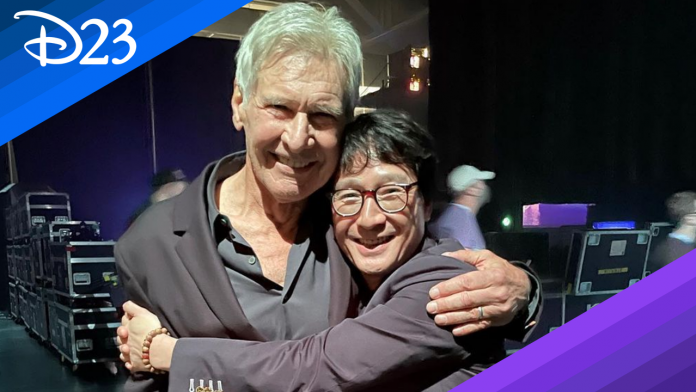 Harrison Ford and Ke Hai Kuan made what is certainly one of the most touching pictures from D23 and beyond, in the form of a photo in which “Indiana Jones and Short Round reunited after 38 years.”

Kuan, who will appear in the second season of “Loki” as the owner of some futuristic store, shared an image of him and Ford, who was in D23 for “Indiana Jones 5“, and it’s just wonderful. For those unfamiliar, Kuan’s Short Round was featured in the 1984 film Indiana Jones and the Temple of Doom and became one of the film’s most memorable characters.

“I love you, Indie,” Kuan wrote. “Indiana Jones and Short Round reunited after 38 years.”

While it doesn’t look like Kuan will be a part of “Indiana Jones 5,” the “Everything Everywhere at Once” star has previously said he would “absolutely” like to make another Indiana Jones movie. Unfortunately, he may have to do it without Ford, as he once again said that this will be the last time he puts on the iconic hat and whip.

The first trailer for “Indiana Jones 5” was shown to those present at the presentation of Marvel, Lucasfilm and the 20th Century studio, but it has not yet been presented to the public. The footage shows Indy walking through the streets of a deserted city, reflecting on his past. We also caught a glimpse of Mads Mikkelsen in Nazi clothes.

As for Loki, the first footage of season 2 was shown behind closed doors and showed Loki back in TVA after the events of the first season. We also see Sylvia, variants of Loki, Mobius and more.

The Flash 7×5: Team Flash suffers from its own fears

Street Fighter 6 can be played on EVO