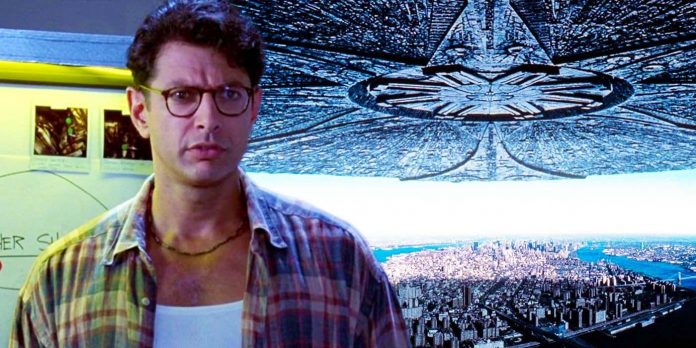 One frame from the 1996 blockbuster “Independence Day” shows how persistent the alien invaders are in their conquest of other worlds. The film directed by Roland Emmerich continues to be one of the most beloved summer films and alien invasion films of all time. On Independence Day, which falls on the 4th of July holiday, aliens arrive on Earth on giant ships capable of wiping entire cities off the face of the earth on their own.

A specific frame on Independence Day showing the consequences of the first alien strike on July 2 shows how ruthless they are in their mission to destroy humanity on Earth. When the film cuts to July 3, the film shows New York City in ruins, with an alien spaceship still hovering over it, preparing to depart. The frame also shows how the ship’s laser cannon is approaching, and this demonstrates that aliens linger over cities for a very long time on Independence Day.

The frame in question in Will Smith’s sci-fi film shows the early morning after the first alien attack, which began the night before. The fact that the alien ship over New York City is just starting to leave when the sun rises indicates that the aliens are launching their powerful laser destroying the city for quite a long period of time before their attack finally ends. Not only that, but staying above the city for so long could also mean that the ships are using a second laser blast to destroy the survivors after the first one.

As Independence Day shows, as soon as one of the ships catches fire, it launches a giant fireball that covers the entire city, with New York, Washington, D.C., and Los Angeles among the many destroyed. The fact that the ships remain concentrated over one city for so long is explained in the film by Jeff Goldblum’s David Levison, who decodes an alien signal transmitted via Earth’s satellites to be a countdown to their attack. No matter how effective the laser of each ship is at destroying one city, the thought of many such strikes at the same time is sobering.

“Independence Day” at its core is a very encouraging film about what humanity can do together. Invasion is, ultimately, what forces the peoples of the world to unite in order to defeat their extraterrestrial enemies. However, “Independence Day” never lets viewers forget what humanity is facing in extremely well-equipped and ruthless alien invaders who carefully make sure that all aspects of each human city are destroyed before moving on to another.

Since its release in 1996, Independence Day has had its own unifying effect, viewers have returned to it every July 4, and Bill Pullman’s performance as Thomas Whitmore remains one of the best film presidents of all time. Since this is still the case, the extremely brutal thoroughness of the aliens in the film helped the Independence Day to survive as wonderfully as it is now. Independence Day, showing the victory of humanity over such a terrifying alien onslaught, also only adds to its timelessness.

One Chicago: The Chicago Med actor who has done the most...