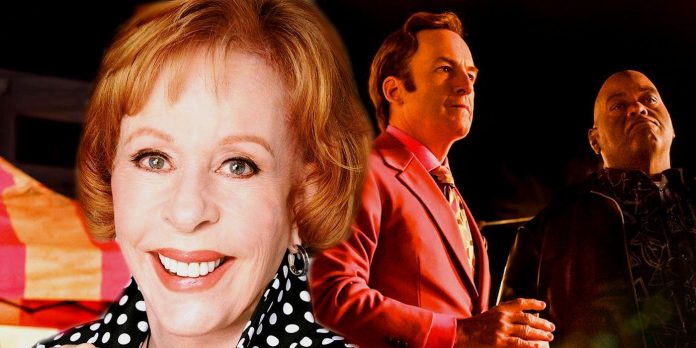 The cast of season 6 of “Better Call Saul” is increasing by the final episodes, and it is now officially confirmed that actor Carol Burnett will join the show. The series “Better Call Saul,” first aired in 2015 on AMC, chronicles the slow decline of attorney James McGill (Bob Odenkirk), portraying his transformation into Saul Goodman, the sleazy criminal defense attorney first seen in Breaking Bad. The show was a huge success with both fans and critics, and season 6 was confirmed to be the last season of the show and received rave reviews.

Unlike previous seasons, season 6 of “Better Call Saul” is divided into two parts. The first seven episodes aired in April and May, and the remaining six episodes are scheduled to air in July and August. The show, created by Vince Gilligan and Peter Gould, has significantly increased the tension this season, and several long-standing characters have already met an unexpected end. The final episodes of “Better Call Saul” are expected to complete McGill’s story and further narrow the gap between the spin-off and the Breaking Bad series. In addition to Odenkirk, Better Call Saul has an outstanding cast, including Rhea Seahorn, Jonathan Banks, Giancarlo Esposito, Mark Margolis, Patrick Fabian and Tony Dalton.

Related: Why Lalo has to die before the end Better Call Saul

According to a new EW report, famous actress and comedian Carol Burnett will guest star in the remaining episodes of season 6 of “Better Call Saul”, playing a character named Marion. Little is known about Marion in terms of her relationship with Saul and other characters, and it is currently unclear how prominent Burnett will be in the series. The announcement was made a few years after Burnett confessed her love for the TV series “Breaking Bad” and “Better Call Saul” in an interview with Jimmy Kimmel.

While much of what awaits fan-favorite characters in the final episodes of season 6 of “Better Call Saul” remains a mystery, it’s clear that the creators are doing their best when it comes to guest appearances. The announcement that Burnett has joined the cast of the series “Better Call Saul” came a few months after it first became known that the latest episodes will also feature actors from the series “Breaking Bad” Bryan Cranston and Aaron Paul, who will play their roles of Walt and Jesse, respectively. . Interestingly, Burnett herself is mentioned in the second season of “Better Call Saul” by Charles McGill (Michael McKean), Jimmy’s brother.

Since Seahorn’s Kim Wexler does not appear in Breaking Bad, many are concerned that the character will not survive the events of the series. Seasons 5 and 6 of “Better Call Saul” have already given fans an idea of Kim’s complicated childhood relationship with her mother, and it’s possible that Marion Burnett is the version of Kim’s mother that currently exists in the series, although Burnett is 89 years old. the old one may make this theory unlikely. Regardless of who Marion is and what her final role is, it looks like fans of “Better Call Saul” are waiting for an exciting final installment of episodes when the show returns on July 11.

Details have been revealed about Jason Momoa’s character Fast X, and...