Home Entertainment In the sequel to Jon Snow, you can finally use 1 key... 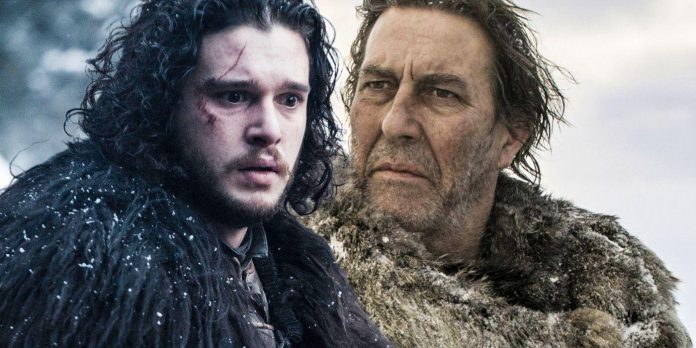 Although “Game of Thrones” overtook George R.R. Martin’s books long before it ended, Jon Snow’s sequel can still use one character from “A Song of Ice and Fire” that wasn’t in the HBO series. It is reported that a sequel to Jon Snow is in development on HBO, in which Kit Harington will again play this role. This is an unexpected move, considering that the ending of “Game of Thrones” quite neatly completed the story of Jon Snow, and the main focus on the spin-offs was on prequels set long before the timeline of John, Daenerys Targaryen and others. However, despite this, there are some intriguing directions in which it can develop.

“Game of Thrones” for the most part bypassed Martin’s books in season 6 (although even before that, increased changes and cuts were made to it), which inevitably included alterations of the Jon Snow story. The most important element — the death of Jon Snow at the hands of the rebellious brothers from the Night Watch — remained intact (although again with some deviations), but otherwise broader changes were made to this plot. This included cutting out many aspects of the Wildlings themselves and their role in the story, with one twist in which Mance Rayder survived, his body swapped for that of Rattleshirt, who dies in his place, and infiltrated Winterfell, completely missing.

Another “Game of Thrones” story and character cut from the books was Val, the “princess” of the Wildlings—the sister of Mance’s wife, who also didn’t make it into the adaptation—who becomes a key figure in John’s arc. It’s unclear exactly where Val will end up, which made it easier for Game of Thrones to cut her out; John’s show version worked, but with Val it would have been even stronger. She represents for him a temptation that he must resist, the opportunity to have a family and the life he dreamed of. But she is also a strong bond with the wildlings, with the lands where he first learned to love and together with her was able to do it again. She is a chance for a happy ending, which he often refused to allow himself, and this could make his fate even more important. However, despite the fact that he cannot directly adapt the same story, the sequel to Game of Thrones about Jon Snow can easily use the character of Val, since the wildlings will have to play a major role in it.

“Game of Thrones” may have shortened the plot of the book, but there are several options for how the continuation of Jon Snow may include Val. John and Tormund Giantsbane went north with the remaining group of wildlings, most of whom are unknown to the public. If the sequel is to focus on this setting, then in any case it will be necessary to concretize some of them; presenting Val as someone from their ranks is an easy way to do this. It would be a little surprising that the reference to the Mansa Raider was not mentioned before, but it can be used, and otherwise most of its basic features would remain intact. She can still be a fierce, brave, beautiful and experienced wildling who can work as a character on her own terms and thanks to her chemistry with Jon Snow. She proves that she is capable, like anyone else, of knowing and exploring the lands beyond the Wall, which can be used depending on what conflicts arise and threats arise in the Jon Snow spin-off.

Alternatively, Val could be positioned as a more antagonistic force. The question of who will be the villain of the sequel to “Game of Thrones” about Jon Snow is relevant, and a conflict between different wildlings is possible. Val is someone who would be respected, and he could lead others and maybe even challenge John’s own authority, again with or without a connection to Mance (although that might help her claim). The battle to unite the wildlings, with John again as an outsider (for some), may become part of the spin-off storyline, and Val will become a worthy opponent for him, who will still be able to preserve some aspects of the storyline of their book, again with hints of romance and temptation. Val is one of the best characters in Jon Snow’s book story, and the one who will strengthen his connection with the Wildlings and create a great background for him, no matter how the series adapts it.