Home Entertainment In “The Return of Daredevil” in the MCU, there are 5 perfect... 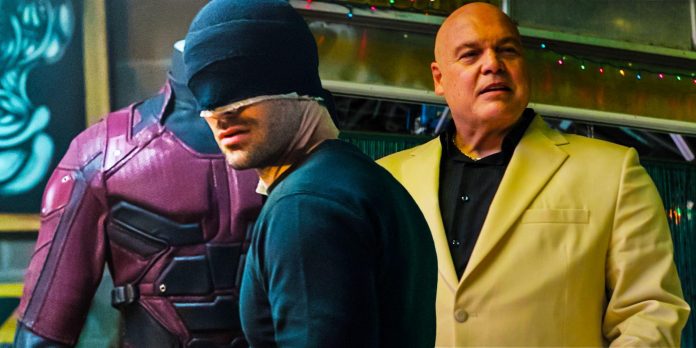 Daredevil has five great villain candidates to replace The Kingpin ahead of his return in the Marvel Cinematic Universe. Daredevil spearheaded the various Marvel-Netflix series from 2015 until the show’s cancellation in 2018. After the mandated two-year waiting period from Daredevil’s end, Matt Murdock (Charlie Cox) returned in a cameo in Spider-Man: No Way Home during the holiday season of 2021, while his show and all other former Marvel-Netflix series have since migrated to Disney+.

Vincent D’Onofrio also returned as Wilson Fisk, a.k.a. The Kingpin on the Disney+ series Hawkeye, while both Cox and D’Onofrio are confirmed to return as Daredevil and Kingpin in the upcoming Disney+ Marvel series Echo. Additionally, Daredevil is set to delve further with his return to the MCU, with a Daredevil “reboot” in the works. While D’Onofrio’s Fisk is very likely to (and should) return as well, he does not necessarily need to immediately reprise his role as The Man Without Fear’s greatest enemy.

RELATED: Why Charlie Cox Is Returning In Marvel’s Echo Before Daredevil Season 4

D’Onofrio’s portrayal of Fisk was an imposing and legitimately scary villain on Daredevil, remaining a consistent presence throughout all three seasons. While Fisk remains a great contributor to the popularity of Daredevil, other famed villains of Matt Murdock’s did not get as much time to shine, with Matt’s MCU return affording them a great opportunity to do so. As The Kingpin plots his revenge on The Devil of Hell’s Kitchen for their inevitable next battle, here are five famed Daredevil antagonists who could be Matt Murdock’s next adversaries.

The distinct ninja theme that Daredevil carries is partly due to the centuries-old ninja organization known as The Hand, who were a significant presence in Daredevil season two, Iron Fist season one, and Matt joining the team in The Defenders. While seemingly defeated at the end of The Defenders, the nature of The Hand themselves makes them very easy to revive with new members and new leaders, and their return could even lay the foundation for the MCU’s Daredevil to adapt the Shadowland comics story arc. Additionally, The Hand had long been opposed by their rival shadowy ninja team known as The Chaste, for which Matt Murdock’s mentor Stick (Scott Glenn) acted as a leader and who were far less openly showcased on Daredevil and The Defenders. The Hand’s revival could lead to Matt fully joining up with The Chaste, with Daredevil’s MCU return leading to an all-out ninja war in the streets of Hell’s Kitchen.

Matt Murdock’s love interest Elektra Natchios was portrayed by Elodie Yung on Daredevil, only for her to travel down the path of villainy in The Defenders, with Elektra’s fate still unknown. Despite their romance, Matt and Elektra’s love has long been fraught with conflict over his heroism and her willingness to go to more brutal lengths as an assassin. Elektra’s dark turn in The Defenders was part of what left Matt emotionally damaged in Daredevil season 3, but in both Marvel Comics and The Defenders, resurrection has never been a bridge too far for Elektra. Having her return could see Daredevil follow Matt and Elektra, meeting once more on antagonistic terms with their romance still looming. Either Elektra remains committed to her role as a new leader of The Hand, leaving her and Matt’s love doomed, or Matt convinces her to leave that life behind, with both joining The Chaste once more.

The return of Wilson’s Bethel’s Dex, a.k.a. Bullseye, in the MCU’s continuation of Daredevil would at once be the return of a previous villain and the chance to see one of The Man Without Fear’s greatest enemies fully realized. In Daredevil season 3, Benjamin “Dex” Poindexter was hired by Wilson Fisk as an assassin, donning a replica of Matt’s horned Daredevil suit to frame him for his many hits. Bethel’s performance as Dex was a complex and dense antagonist with a tragic past, with Daredevil season 3 setting up his return as Bullseye before the show’s cancellation. Charlie Cox himself has expressed great interest in a Daredevil-Bullseye rematch, a feeling shared by many Daredevil fans given the show’s excellent showcasing of Bullseye’s abilities along with Matt and Dex’s fight scenes being among the best of the whole series. As a result, it feels like Marvel’s Daredevil future genuinely needs Bullseye’s return.

Dex is not the only Bullseye that Matt Murdock could find himself battling in his MCU future, with Lady Bullseye being just as strong a candidate. Though a more recent addition to the Daredevil comics, Lady Bullseye is a ruthless and cunning assassin and more than a match for Daredevil in a fight. Her comic book history also maintains a certain aura of ambiguity about her identity and background, with Maki Matsumoto being her civilian name that may or may not be an alias. As a new villain for Daredevil, Lady Bullseye could appear in both singular and individual capacities, acting as a lone assassin against Matt or one deployed by The Hand to eliminate him after The Defenders. Lady Bullseye could also appear as a rival assassin of Bullseye himself, creating a three-sided conflict of assassins with their own agendas out for Matt Murdock’s head.

Given Matt’s one-shot fights as Daredevil, Wilson Fisk is hardly the only crime boss he regularly battles, and Lonnie Thompson Lincoln, a.k.a. Tombstone, could be one such villain for Daredevil to oppose. Tombstone’s large frame and massive strength could make him as much of a physical challenge for Matt as The Kingpin. Meanwhile, his appearance could also gradually re-introduce Fisk into Daredevil’s story, with Tombstone being a known associate of The Kingpin’s. Tombstone might also be a particularly fitting villain for Daredevil to face after his cameo in No Way Home, with Tombstone, like The Kingpin, being a well-known adversary of both the Wall-Crawler and The Man Without Fear. A fully-fledged team-up of Spider-Man and Daredevil seems like a genuine possibility after No Way Home, with Tombstone perfect to face them either together or individually.

In any event, with The Kingpin overseeing his criminal empire as the long-standing arch-villain of Daredevil, he and Matt meeting again is inevitable and sure to come to the delight of the many enthralled by D’Onofrio’s electrifying performance as Wilson Fisk. That said, Daredevil’s rouge’s gallery need not be dominated by The Kingpin alone. Whatever shape Daredevil takes post-Echo, the above five antagonists would make outstanding picks for Matt Murdock to tangle with in between bouts with The Kingpin.