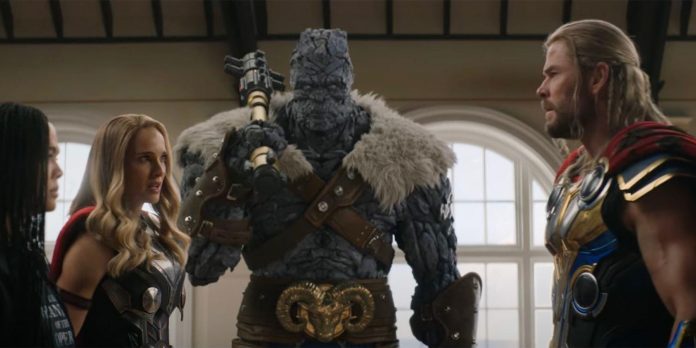 “Thor: Love and Thunder” will be released in just a couple of weeks, and as a result, the promotional tour is in full swing. Now Taika Waititi and Tessa Thompson have helped share new clips showing how Chris Hemsworth’s Thor adapts to Natalie Portman’s transformation into the Mighty Thor.

In the movie “Thor: Love and Thunder”, the main character of Hemsworth embarks on a journey of self-discovery, which was interrupted by the appearance of Gorr-the butcher-god Christian Bale. Determined to kill all the gods for the injustice he suffered, Gorr’s mission will bring Thor and Jane Foster together again as they team up to defeat this sinister new villain.

During an appearance on The Late Show with Stephen Colbert, Waititi presented a new clip in which Thor and Korg find themselves in a crowded room full of Asgardians (presumably). While Jane Foster talks to the crowd, Korg tries to find out details about Thor’s past with the help of his ex-flame, while the latter watches his ex across the room. When Korg asks if it is difficult for Thor to see his former lover with his former hammer, and gets along so well, the God of Thunder tries to call Mjolnir back into his hands. Instead, he finds himself summoning the Thunderer, which he pretends was his intention from the beginning.

Meanwhile, on Jimmy Kimmel Live, Thompson presented another clip in which her character Valkyrie along with Thor, Foster and Korg. It looks like the group is trying to find a threat (presumably Gorra) and conclude that they must be in the shadow realm. When Thor explains that the atmosphere in the shadow realm contains darkness so powerful that color is almost afraid to venture there, Foster says, “If we need color, let’s bring a rainbow,” before flying off by herself. Thor and Valkyrie discuss how difficult it is for Foster to come up with good catch phrases until she returns and admits that she was in a hurry. The group then comes up with another plan, suspecting that their new enemy might set a trap.

Judging by the new clip “Thor: Love and Thunder”, it seems that both Thor and Foster have a little work to do. While Thor will have to get used to the fact that Mjolnir is in the wrong hands, Foster has problems with improving her superhero image.

This situation should be an interesting journey for both heroes. Nevertheless, it’s nice to see that both are able to work well together, even if their romantic relationship has seemingly fallen apart.