Home Entertainment In the new bar on the Star Wars cruise ship, you can... 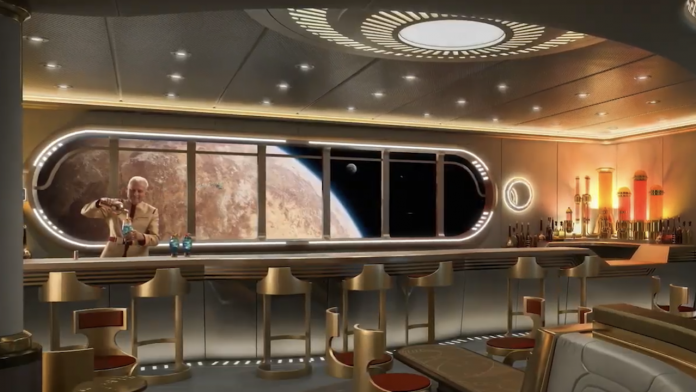 The Hyperspace Lounge on board the Disney Wish cruise ship serves the “rarest” and most “valuable” cocktail from the Star Wars galaxy, but it will cost you $5,000.

A drink with big tickets appeared in a video on social networks showing exactly what you will get for all these credits. The drink arrives at the table enclosed in a kamtono (a protective container used to store valuables in the Mandalorian and the Boba Fett Book), and is opened by pressing a button and turning a rotating cylindrical handle.

Like the props used on the screen, the side panels of the carrier open, giving the recipient access to the contents of the container. Inside, there are apparently three shot glasses serving a $5,000 concoction officially known as Kaliburr Crystal on the Hyperspace Lounge menu, according to MickeyBlog.com , which does not actually specify the ingredients.

People were thinking about what might be in the cocktail because of its high price. FanByte noted that one of the popular hypotheses is Remy Martin Louis XIII cognac, which usually costs 3000-4000 dollars per bottle, or some other high-quality liqueur, although it is also possible that this is a more standard liqueur of the highest quality presented in a new form. .

If you prefer to save your credits, the cocktail menu at Hyperspace Lounge has a variety of drinks at the regular price starting at $15 for Spire Sunset, which contains a refreshing blend of Saigon bagura, kamquat, lychee and coconut. Guests can also take home a glass of Hyperspace Lounge Glass when buying any cocktail for an additional $12.

Until now, all eyes have been on Star Wars: Galactic Starcruiser, a new immersive hotel that allows fans of a galaxy far, far away to live their own Star Wars stories. We’ve gathered everything we know about this brand new experience, including how much it costs, what food options there are, and more, to assess whether it’s worth it.

The authors of the thumbnail image: Disney.

Why Luke Hemsworth plays actor Thor (and not Liam)