Home Entertainment In The Adam22 No Jumper Podcast, There Was a Fight Between The... 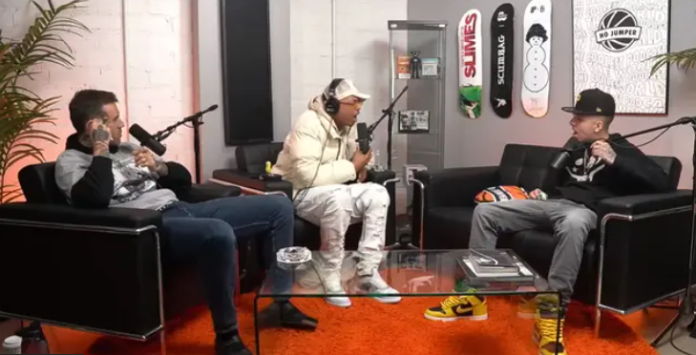 During an interview on the No Jumper podcast of social media star Adam22, a fight broke out between the guests of Suspect and Kelpy after they got into a heated argument.

Interviews can be heated in the Adam22 No Jumper podcast, but they rarely escalate into a fight on camera.

During a recent episode of the No Jumper podcast featuring Adam, rapper Almighty Suspect and Lil Kelpie, the relationship between the guests became very heated.

After a lot of insults were thrown at each other, the suspect provoked a fight by spitting in the Kelpie’s face and hitting him hard.

Interview for the No Jumper podcast turns into a fight

On November 23, No Jumper published a three-way interview that didn’t last ten minutes. During the video, the Suspect took offense at the Kelpies’ clothes in their previous interview, where the 19-year-old was dressed in a pimp’s black fur coat, comparing it to a blackface and even calling it a “suit”.

Kelpie took offense at his comments, and the couple got louder and angrier at each other.

The suspect became increasingly agitated and got up from his seat, spat on the Kelpie and began hitting the teenager in the face, inflicting several blows.

The video went viral on social media: in just one day after its publication, it gained more than 200,000 likes on Twitter and more than 1.5 million views on YouTube.

The release date of God of War Ragnarok has finally been...