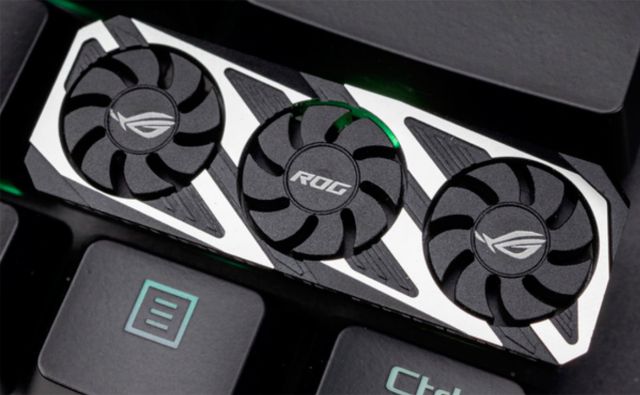 ROG Strix: Are you looking for a graphics card and can’t find it due to lack of stock? Asus offers you the possibility to decorate your keyboard with a miniature ROG Strix. The lack of stock of graphics cards or GPUs has been driving PC gaming fans for some time, mainly due to the crisis in the semiconductor industry (Sony and Microsoft also give good faith to this with their PS5 and Xbox Series X|S, respectively), in addition to the boom in mining in the cryptocurrency sector, giving rise to a speculative market that has rarely been seen. Be that as it may, Asus seems to have an idea waiting for better times in the sale of graphics, not even as a joke. So much so, that it has introduced the so-called ROG Strix TouchStone, a key for keyboards in the shape of a graphics card, including three fans… that rotate!

Thus, this key with such a special design tries to emulate what an Asus ROG Strix series graphics card would be like with its triple fan, so common in this type of mid-high-end GPU design. But the best of all is that these three fans really work, turning when you drag your finger over its surface and causing a most curious effect. In addition, it contains translucent parts, so if the keyboard incorporates RGB lighting, this miniature graphic will also emulate the typical gaming light configurations.

And to top it all off, the product is delivered in a small box that mimics the packaging of a real graphics card, with its different little boxes inside and padded material. The key is made of polished aluminum alloy, incorporates laser-engraved logos and is compatible with Cherry MX switches.

All this for 399 yuan, about 55 euros to change; And it seems that, unfortunately for those who like to customize their equipment to the extreme, this very special product has been manufactured only for the Chinese market and there seem to be no plans for international distribution.