Home Entertainment In every way, Haunted Chocolatier is different from Stardew Valley 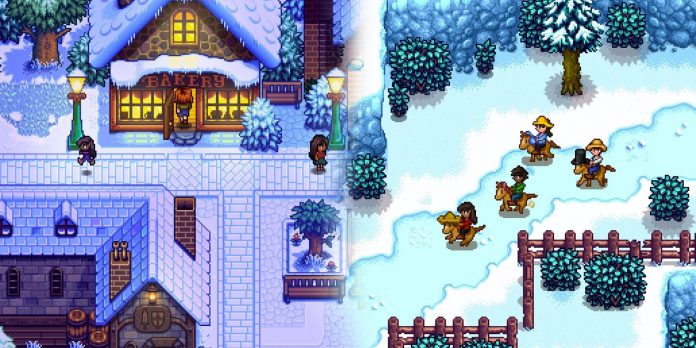 Haunted Chocolatier is still in development, but Stardew Valley fans from ConcernedApe are already looking forward to its release. The trailer, revealing the gameplay, demonstrated the familiar cozy art style that many players first saw in Pelican Town. It seems that ConcernedApe has adopted the visual style and is constantly improving it for the upcoming game.

However, the trailer also showed a new setting, new gameplay elements and much more. Thus, the new name of ConcernedApe will definitely not be Stardew Valley 2. Judging by what has been revealed so far, it looks like Haunted Chocolatier will be a different game with something similar to its predecessor.

RELATED: Haunted Chocolate Should Expand the Potential of NPC Relationships in Stardew Valley

How does Haunted Chocolatier differ from Stardew Valley

The most obvious difference between the two games is the setting. The early gameplay of Haunted Chocolatier reveals a trailer showing scenes of a snow-covered town, which is probably the main game area. Here is a chocolate factory — a tall mansion where the player can create confectionery and open his shop. Of course, this also means that the player will encounter a new set of characters, with some of whom, according to ConcernedApe, it is possible to form romantic relationships.

In Haunted Chocolatier, most likely, there will be completely different gameplay elements than in Stardew Valley. After all, the original game was a farming simulator, and Haunted Chocolatier is more like a store simulator. So instead of taking care of crops and animals, players are more likely to focus on managing resources and resupplying their chocolate shop while juggling the more social aspects of the game or finding secrets hidden beneath the surface.

In addition to the mechanics of managing the store, there will also be more fighting in the game. This is clear from the trailer when the player is shown jumping through a portal and fighting mobs for different ingredients. In fact, it turned out that there will be boss battles in Haunted Chocolatier, which suggests that the combat mechanics will be more subtle than what players experienced in Stardew Valley.

There were a lot of fantastic creatures in Stardew Valley — Junimo, Shadow People, Gnomes and many others. However, Haunted Chocolatier can add more magical elements. The trailer already demonstrates an important new entity in the game: ghosts. These little ghost sprites act as assistants in the player’s chocolate shop, serving customers and carrying pieces of chocolate on their backs.

There is also the fact that the player has access to a magic portal that takes him to new locations. How the player inherited such a magical mansion is still unknown, but it certainly sets the stage for the introduction of additional magical functions. Haunted Chocolatier can introduce more creative races or even delve into those that were showcased in Stardew Valley. Alternatively, the game could delve more into the nature of magic, as it was not explored in detail in the previous game.

Thus, although Stardew Valley and Haunted Chocolatier have similar artistic styles, they represent different experiences. Haunted Chocolatier has new gameplay mechanics, new knowledge and a completely different atmosphere, and this sets it apart from your favorite farm simulator. However, it still seems to evoke the same comfort and warmth as Stardew Valley, which is a testament to ConcernedApe’s skill as a single-player game developer. That’s why fans are so excited about the game’s release.

Dead by Daylight will feature a Resident Evil chapter