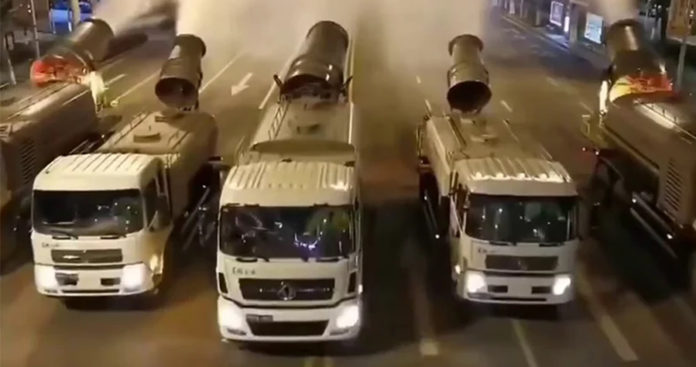 Disinfection processes continue in cities under the quarantine, especially Wuhan, due to the Corona virus. In the new images published, it seems that the streets of the city are disinfected with trucks and motorcycles.

Due to the Corona virus, 15 cities in China are still under quarantine. About 50 million people live in quarantine in the province of Hubei, including the city of Wuhan. In addition to treating the corona virus in these cities, the Chinese administration is also working to prevent the spread of the virus.

New images shared from the Twitter account of People’s Daily, one of China’s state newspapers, show their disinfection in cities under quarantine. He is trying to remove the streets of the city from the virus with the giant disinfectant sprayers placed behind the trucks in the videos shot in Wuhan. Trucks spraying disinfectants emit a white mist around them.

In the video shared from the Twitter account of Global Times, another state newspaper belonging to China, it is seen that the smaller streets and parks of the city, which is also quarantine gold, are disinfected with a disinfectant sprayer placed on the motorcycle.

No official statement from China has been made about the content of the disinfectant substance sprayed by Wuhan streets and streets. A report by Business Insider stated that the disinfectant may be a low concentration of bleach and water solution.

Images from disinfection with trucks and motorcycles in Wuhan:

Full-front disinfection work has started in #Wuhan, an effort to contain the spread of #coronavirus pic.twitter.com/E3Vg8XcHTP

Wuhan, the epicenter of the #coronavirus outbreak, began a city-wide sterilization campaign. Chinese netizens hail the move, hoping it will lead the city back to safety. pic.twitter.com/yzsCwO9WvM