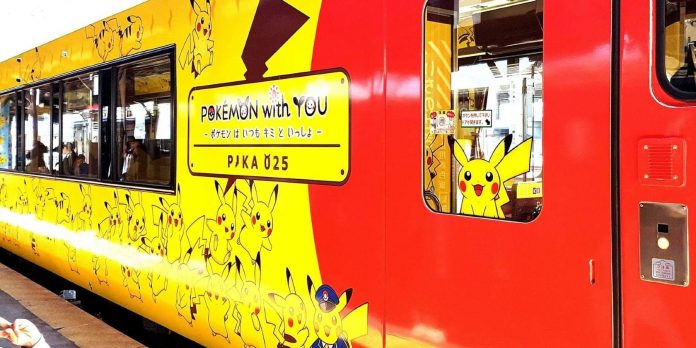 Pokemon are popular all over the world, but, as expected, Pokemania is huge in Japan, where it originated. Pokemon can be found in a variety of places in Japan, even decorating manhole covers or airplanes.

One example of this is the Pokemon train that runs in Japan. The train is completely decorated with images of Pikachu inside and out, delighting fans, both young and old.

A Twitter user recently shared photos of the interior of a Pikachu train. While just posting images of Pikachu would probably be enough to please some fans, the decoration has clearly gone far beyond that, as the photos show. The overall design of Pikachu was used to decorate the entire train. Tracks, tail, stripes on the back and the general silhouette of Pikachu appear on the seats and floor of the train. Various types of pokeballs can also be seen along the edges of the seats.

Also shown is the next train car, which has not only jewelry, but also large plush Pikachu toys. This particular Pokemon train carriage is designed to provide kids with a place to play and also offer cute photo opportunities.

While Pokemon have been used to decorate all kinds of vehicles over the years, this particular train has an altruistic purpose. It began a year after the strong earthquake and tsunami in Japan in 2011 to bring people back to the region as tourists and help cheer up the children who have experienced so much during this time. The train makes regular long stops so that passengers can get off and explore the area, and fans can also collect stamps at each stop in a special activity sheet.

It is a bit difficult to enter Japan as a tourist now, as there are restrictions related to the impact of the COVID-19 pandemic. However, for those who are interested in the trip, tickets can be purchased in advance. The train has undergone design changes over the years, so even fans who have ridden it before may want to check it out again on future trips to Japan.

Many game-related companies, including Bungie and Square Enix, have made efforts to help raise funds and raise awareness of affected areas after the 2011 earthquake. While the earthquake is just a memory for many, the Pikachu train continues to bring smiles and tourists to the region.

BTS Suspends Run Episodes For a While, What Is The Reason?