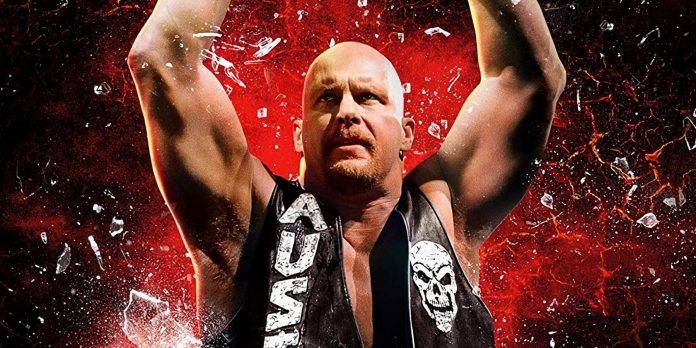 For the first time, this became known in the promotional video of the Broken Skull Sessions episode, which is a live version of the Stone Cold podcast, where he interviews various guests. To help promote new episodes, Stone Cold often hosts a segment in which he asks his guests quick questions, which he did when he interviewed Cody Rhodes. One of the questions Austin asked Rhodes was what he thought was the best Zelda game, to which Rhodes replied Ocarina of Time. Austin responded by saying that Breath of the Wild is actually Zelda’s best game.

Now WWE has released behind-the-scenes photos of the Broken Skull Sessions, which show Austin with some of the guests he featured on the program last year. In one of the photos, Austin is playing The Legend of Zelda: Breath of the Wild on a screen that is usually used to showcase wrestling matches and photos complete with Switch Joy-Cons.

Austin is one of the most popular WWE superstars of all time, if not the most popular. He is best known for his work during the attitude era, when he was a WWF champion and had high-profile feuds with the likes of Mick Foley, The Rock and the Undertaker. Due to nagging injuries, Austin retired from the ring in the early 2000s, but earlier this year he made a shocking return to WWE at WrestleMania 38.

At WrestleMania, Austin had his first match in decades, coming face-to-face with Kevin Owens. Their fight was well received and many were impressed with Austin’s performance after he had been out of the ring for so long. Austin reappeared on the second night of WrestleMania, delivering Stone Cold Stunners to the likes of Austin Theory, Pat McAfee and nemesis Mr. McMahon.

Now that Austin’s love of “Breath of the Wild” has become public, it will be interesting to see if he shares his opinion about the upcoming sequel. The sequel to The Legend of Zelda: Breath of the Wild is expected to be released sometime in 2023, although no official release date has been announced at the time of this writing.

The Legend of Zelda: Breath of the Wild has already been released for the Nintendo Switch and Wii U.

Blade of Darkness, the Spanish precursor to Dark Souls