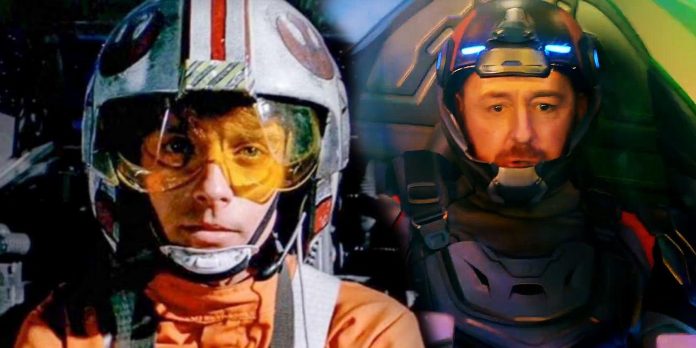 Seth MacFarlane’s “Orville” is known for its affectionate homage to the classic “Star Trek”, but in season 3, episode 9, “Domino”, it is also largely borrowed from “Star Wars”. In Domino, Orville’s war with Kaylon culminates in an exciting alliance, betrayal, an epic space battle, and a full-scale planetary assault. This contributes to the show’s reputation for ambitious visuals, which previously won the Orville Emmy for Outstanding Special Visual Effects back in 2019.

“Domino” is an impressive combination of the ethical dilemmas of Gene Roddenberry’s “Star Trek” with the high-stakes space battles of George Lucas’ “Star Wars.” It begins with a test of weapons that can turn the tide of the war against the Keylons. The destructive power of weapons leads to ethical debates about whether genocide is an acceptable price to pay for victory. It is this kind of wartime moral quandary that defines the moment of “Orville’s Star Trek: Deep Space 9.” However, when this ethical dilemma quickly reaches a compromise, everything is ready for the episode’s epic climactic cosmic battle.

Having successfully used weapons to negotiate a truce with the Keylonians, the Union was waiting for the start of the peace process. A peace process that is threatened when weapons are stolen and handed over to the Alliance and the common enemies of the Keylons, the Krill and the Moklans. They intend to use the weapon for its original purpose to destroy the entire Caylon race if the Orville crew cannot stop them. The implementation of the weapon is a visual allusion to the Death Star and Starkiller Base from the Star Wars franchise.

Having been expelled from the Union at the end of the 8th episode of the 3rd season of the TV series “Orville”, “Midnight Blue”, the moklans are looking for new allies to protect themselves from the threat of Kaylon. Their most logical alliance is with the Union’s sworn enemies, the Krill. When this new alliance discovers that the Alliance has created a weapon capable of destroying Kaylon, they hatch a plan to steal it, amplify its signal, and turn the nearest planet into their own Death Star. Orville tracks down the stolen weapons and leads a full-scale Union and Kaylon attack on the combined forces of Krill and moklan to prevent the activation of the weapons.

Unlike previous episodes, the Domino climax does not borrow elements from Star Trek, but instead uses visual cues from the Star Wars franchise to destroy its own version of the Death Star. Gordon (Scott Grimes) and Lamarr (Jay Lee) board X-Wing fighters, while Kelly (Adrianne Palicki) leads the team through a ground assault on the Krill facility/Moklan. These hints of “Star Wars” are backed up by a production design that recalls the inner workings of the “Death Star”. The biggest visual allusion is how the beam of the weapon is triangulated on the surface of an abandoned planet.

References to “Star Wars” are also present in the plot. Like Obi-Wan Kenobi in Star Wars: A New Hope and Han Solo in Star Wars: The Force Awakens, Charlie (Ann Winters) sacrifices herself so that the team can succeed in their mission. Charlie’s sacrifice for the survival of her Keylon enemies inspires the bloodthirsty androids to rethink their prejudices against organic life and eventually leads to peace with the Union. Combining the morality of “Star Trek” with the action of “Star Wars,” “Orville” is a powerful sci-fi action adventure about peace and understanding, proving that it can more than stand together with these influential ancestors.