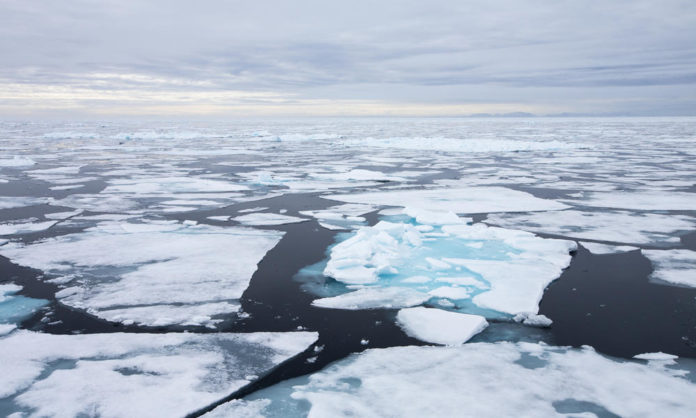 According to a new study by NASA, melting in glaciers in the Arctic Ocean is changing the direction of ocean currents. This is a consequence of climate change and can have impacts on Western Europe.

According to a new study by NASA, a large oceanic current in the Arctic began to become faster and more severe as the sea ice melted rapidly. The current is seen as an effect of human-induced climate change and contains part of the delicate Arctic region filled with fresh water.

Using 12-year satellite data, scientists measured how this circular stream called the Beaufort Cycle balances an unprecedented amount of cold, fresh water. This change is also said to have the potential to change currents in the Atlantic Ocean and cool down the Western European climate.

Two times fresh water accumulated at Lake Michigan:
The Beaufort Cycle balances the polar environment by storing fresh water near the surface of the ocean. This fresh water has an important place in the Arctic because it floats on warmer, salty water and helps counteract the melting of sea ice; this plays a role in keeping the Earth’s climate in balance. The cycle slowly releases this fresh water to the Atlantic Ocean for decades, and the Atlantic Ocean currents carry it in small quantities.

According to the results, the ocean cycle has accumulated nearly twice the amount of fresh water from Lake Michigan since the 1990s. The new study published in Nature Communications says that the reason for this increase in fresh water concentration is the loss of sea ice during the summer and autumn periods. The ice that melted for decades in the summer season of the North Pole exposed the Beaufort Cycle to more winds that spin the ocean cycle faster and imprison it in the stream of fresh water.

Permanent western winds have also dragged the current in one direction for more than 20 years, increasing the speed and size of the current clockwise and preventing fresh water from leaving the Arctic Ocean. This decades of western wind is considered unusual for the region where the winds change direction every five to seven years. At this point, scientists are constantly on the alert for the possibility that the wind changes direction again, since if the direction changes, the wind reverses the current, causing the accumulated water to be released once.

Western Europe may be affected if fresh water is left in the Atlantic:
Tom Armitage, who works as a polar scientist at NASA, says that if the Beaufort Cycle leaves too much fresh water to the Atlantic, circulation may potentially slow down, and this will have an impact, especially in Western Europe. At this point, it is also said that the fresh water released from the North Ice Sea to the North Atlantic can change the density of surface waters.

Normally, the water coming from the Arctic comes into contact with the atmosphere, losing heat and moisture, sinking to the bottom of the ocean, where it directs water from the North Atlantic Ocean to the tropics. This important current, called the Atlantic Meridional Roll Over Circulation, helps regulate the planet’s climate by transporting heat to northern latitudes, such as Europe and North America. If this trend slows down sufficiently, it can adversely affect marine life and its communities.

According to the study results, researchers think that ice loss has very important effects on our climate system. In addition, the researchers said that they hope that this change will not close the Gulf Stream, but they will still have effects.