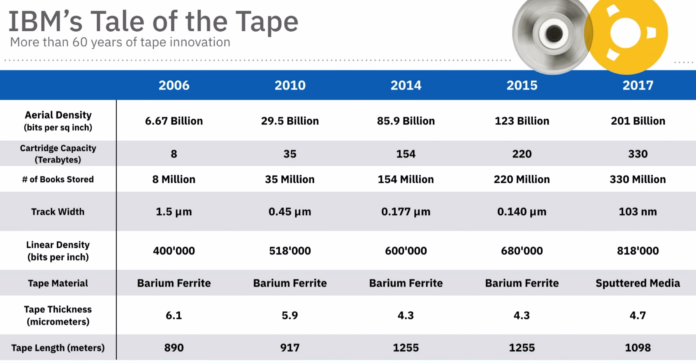 IBM and Fujifilm announced that they had developed a 580 TB capacity magnetic tape prototype, breaking world records in storage density. The new technology is thought to meet the needs of systems in the next few decades.

IBM researchers and Fujifilm came together for a 580 TB capacity tape prototype. For your better understanding, this capacity is equivalent to 6 of the largest SSDs in the world (Nimbus Data 100 TB) or 29 Seagate Exos +20 TB hard disk drives.

Fujifilm used Strontium Ferrite (SrFe) particles and some techniques to significantly increase capacity in this new band. In this way, new magnetic tapes that can obtain higher storage area by using the same amount of tape were implemented.

For those who don’t know, tape storage is currently based on Linear Tape-Open or LTO format, and LTO-8 is the highest capacity available today, with 12 TB per cartridge. In this sense, the new magnetic tape developed by Fujifilm and IBM broke a world record in storage density.

According to the two companies, steps like this need to be taken in order for the world’s storage capacity to keep up with the demands of future systems. According to IDC’s estimates, the amount of information created, captured, copied and consumed in one year was around 33 zettabytes in 2018, and this number is estimated to reach 175 zettabytes by 2025. New technology is vital for storing such large amounts of data.

In fact, magnetic tapes have been used as storage mechanisms for over 60 years. Even in 2020, this model is considered the most reliable and costly for companies in the industry. IBM and Fujifilm, on the other hand, are working on such advanced models as they believe tape will remain the primary method of preserving information for several decades.

Windows 11: Patch That Fixes Bugs On AMD CPUs Is Now...