Home Entertainment “I ended up in an elevator with my idols, Gerrard, Fowler and... 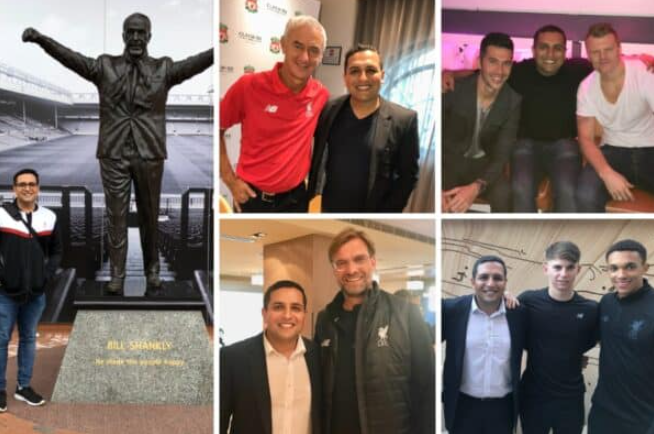 In the latest issue of My Liverpool Life, Reds fan Nish Vir talks about his unique life supporting the club so far, starting from the days of his podcasts and ending with those very early starts in Australia.

I started supporting Liverpool because…

My dad moved to Liverpool in the early 70s as he was a fan and my two older brothers were born there, so I really had no choice.

However, I didn’t get the pleasure of being born in the city, since my parents left in the 1980s, and I grew up a Southerner… very woolly, I know.

My first game in Liverpool was…

As crazy as it sounds, it was Liverpool’s tour of Australia in 2013 when they played in Melbourne in front of 96,000 fans.

I never thought this would be my first game, but since my parents moved from the UK to New Zealand in 1995, I’ve never had the opportunity. I know that this game was the first for many Liverpool fans from Australia and New Zealand, so it was really special.

My favorite season in support of the Reds was…

For me, the 2013/14, 2018/19 and 2019/20 seasons stand out in many ways because football was absolutely electric, I won the Champions League and the Premier League in the last two mentioned seasons respectively… but for some reason my mind always goes back to our 2000/01 season.

I have just turned 18, Michael Owen has been working to the fullest, and Gerard Houllier has just led us to victories in the FA Cup, League Cup and UEFA Cup. Just a great time to be red!

I am currently following the club…

A shot from my couch in Sydney, Australia. The last time I was with my wife in Liverpool was in 2018, before the world turned upside down.

It still feels like home to me. The city, the people, Enfield… it all seems familiar, despite the fact that I’ve been away from it for so long.

No matter how bad we play, I still try to get up at stupid times to watch our reds, because I haven’t learned the art of watching a game that isn’t live (just no excitement!).

Liverpool is a unique club because…

Even if we got rid of all our players, our staff, our stadium, everything, we could recover with the same identity and spirit.

We sincerely accepted the values that permeate the city and instilled them in our club. It’s a special thing to know that the club you love and have been following all your life also believes in the same values as you.

It’s not fabricated or used as a marketing gimmick, it’s just who we are.

My best red-related story is…

During the LFC Legends tour of Sydney in 2017, I found myself in an elevator with many of my idols, Steven Gerrard, Jamie Carragher, Robbie Fowler, Houllier and others.

During the elevator ride down, one of the players said something like “Wow, just like in the good old days, when we’re all here, and you, old man (Beehive), it’s so cool.”

Robbie Fowler stepped in and said, “Well, it looks like I’m not getting a game tomorrow!” and all the players burst out laughing.

It was so nice to see that after all these years and the heartache Robbie must have gone through because Gerard didn’t pick him often, now they can laugh about it.

One day I met…

Damn, that’s it! The great thing about being an Australian Red is that the players are very welcoming and happy to hang out in this part of the world.

Thanks to my friends from LFCNSW (the official fan club), I had many opportunities to meet almost all the players of 2013, 2015 and 2017 (legends), as well as other legends of the tour, such as John Barnes (my idol).

Have you had your own LFC podcast in the past, what inspired you to go to this space and what is the biggest memory left of it…

I really just wanted to talk to other reds around the world. I would have asked some of the larger podcasts if I could be a guest, but with my small number of subscribers on the internet consisting of 10-20 people, I never looked in, so I just made one myself!

The whole point of “The LFC Couch” was to connect with reds like me from all over the world who had an incredible passion for the club, but not for social subscribers who would attract the attention of more reputable podcasts to them.

Four and a half years later and about 600+ episodes, it was a great run, but real life eventually catches up (having two kids) and it was the right time to hang up the mic and get busy raising a family. .

Most of all, I remember how LFCNSW invited the LFC Couch team from Sydney (me, Peter Kofinas, George Xanthis and Nick Nova) for live entertainment on the eve of the Champions League final.

The first one didn’t go as planned with the result, but the second one we did, and the whole night was amazing. Just feeling the energy of hundreds of people at Cheers Bar, Sydney, entertaining them with chats, trivia, prizes, etc., we really felt like a big part of the community that evening.

If I could have dinner with three people from Liverpool’s past or present, I would choose…
John Barnes, Bill Shankly, and Craig Johnston are all wonderful people, and I’m sure they’re a lot of fun to have dinner with. Just like that one.