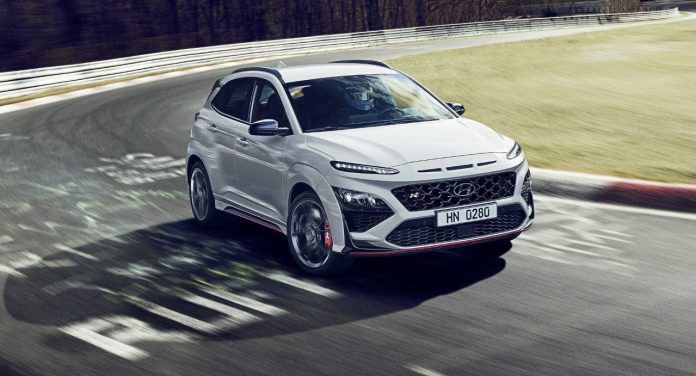 Hyundai Kona N Introduced. Hyundai’s performance brand N introduced its first crossover. The Korean automaker hopes that this body style will push the sub-brand more into the mainstream. The new Hyundai Kona N will be launched with a 2.0-liter four-cylinder turbo gasoline engine that produces 280 horsepower and 392 Nm of torque.

In addition, the new power unit can be increased up to 290 hp for a limited time with the N Grin Shift, which is called the overboost function. The new Hyundai Kona N has an 8-speed dual-clutch transmission that includes modifications suitable for high performance use and transmits the power to the front wheels.

The control unit of the new Hyundai Kona N has been renewed to allow gear ratios specially adjusted for it and more rapid gear shifts. In addition, improvements have been made to the transmission of the crossover.

When Hyundai Kona N activates the Launch Control feature together with its newly developed units, it reaches 0-100 in 5.5 seconds. In addition, it should be noted that the first crossover of the N brand had three different functions named N Grin Shift, N Power Shift and N Track Sense Shift.

The N Grin Shift function acts as an overboost and runs the engine and transmission at maximum power for 20 seconds. The Power Shift function is activated during sudden acceleration and maximizes torque during upshift. N Track Sense Shift, on the other hand, automatically optimizes the up and down moments for a sporty-focused driving.

The Hyundai Kona N , with its high-performance braking system, has an electronic limited-slip differential “for maximum fun in the bends”, according to the manufacturer. On the other hand, let’s mention that there are 5 different driving modes in the car, namely Eco, Normal, Sport, N and Custom.

The car, which has more aggressive details than the standard model in its exterior design, has a different grille design and red lines. In addition, new sills, front spoiler, N badges, large exhaust outlets, double-wing spoiler and a triangle-shaped third brake light stand out as the parts that make the car sporty.

On the inside of the new Hyundai Kona N , it welcomes its users with a red colored NGS button and a sporty steering wheel with gearshift paddles. There is also a digital instrument panel and a head-up display behind the steering wheel.

The car also has a multimedia screen where the 10-inch driver can view track maps and lap times. In addition, the interior features alloy pedals, N sports seats and performance blue details.

The price of the new Hyundai Kona N, which is planned to be available before the end of the year, is yet to be determined.

iPhone: how to move apps and create folders