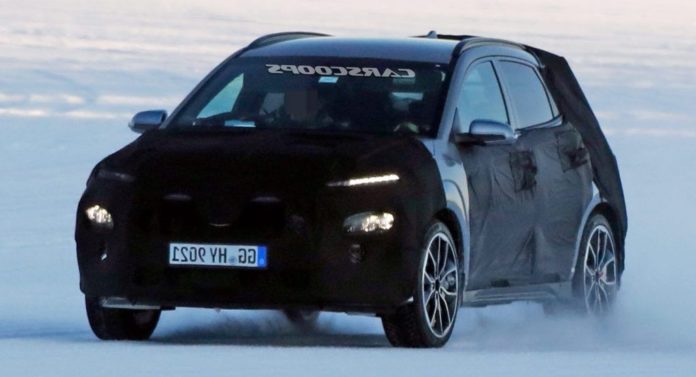 The Kona N model of the South Korean-based automaker Hyundai was displayed for the first time. The car, which is expected to arrive with a 2.0-liter engine, was tested on a snow-covered road.

Hyundai had previously tested a prototype of Kona and we had the first images of Kona at that time. Now the N version of this model has appeared. Kona N is expected to be one of the major performance models of this year. The model in question was reflected in the lenses while in the winter test today.

It is possible to make predictions about the vehicle, the majority of which is covered, from some sections. Looking at the images, we can say that the car has wider fenders, red Brembo brake caliper covers and large exhaust outlets.

Hyundai Kona N on the road with camouflage:
We heard the first information about Sportif Kona in 2018. The new photos show that the vehicle of the South Korean company has received production approval. On the other hand, it is understood that advanced stages were passed in the testing process. Kona is known as the South Korean brand’s model in the B-SUV segment.

According to the transfer of Motor1, the car’s 2.0-liter turbocharged engine, which can produce 275 horsepower and 352 Nm of torque associated with a 6-speed manual transmission, is located under the hood of the vehicle, which is understood to be preserved. It seems that the headlights and grille design have been renewed, but whether the Kona N will come with the same engine or a different version remains unclear.

There are no serious changes in the back. Apart from the modified brake lights and the bumper, there is no exciting innovation. At this point, we can say that Kona N will rival the Volkswagen T-Roc R with 300 horsepower directly.

The introduction will take place this summer:
N version of Hyundai Kona; It brought along infrastructure changes such as the chassis, suspension and braking system. According to the spokes, the launch of Hyundai Kona N will be held this summer. The vehicle will be launched in 2021. We will continue to convey new developments regarding the latest model vehicle of the South Korean automotive giant.

NASA: Starliner’s first manned flight should not take place until 2022