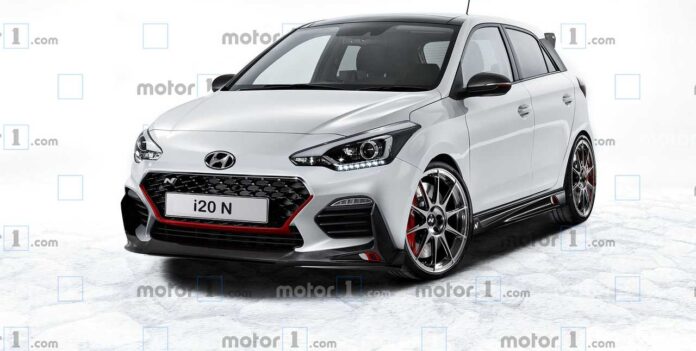 For the first time, Hyundai introduced the N model, which is the sportive member of the i20 series, with an official introduction. In the images, the i20 N is being tested by Hyundai Motorsport’s WRC driver on a frozen lake.

Hyundai confirmed the i20 N, which was captured last year with camouflage test images, with a promotional video. The N model, which is planned to compete with models such as Ford Fiesta ST, Peugeot 208 GTi and Volkswagen Polo GTI, was first released with an official video.

The video shows the 2020 Hyundai i20 N prototype with camouflage on the front and back. The images were recorded on a frozen lake in the Arjeplog region in northern Sweden. Thierry Neuville, the WRC driver of Hyundai Motorsport, sat behind the wheel of the vehicle. Hyundai also tested the i30 N in this region.

Hyundai i20 N will arrive as a stronger and sportier model
Emphasizing that the Hyundai i20 N is a sporty and moving model compared to the standard i20, it has features such as larger wheels, dual exhaust outlets, lowered sports suspension and larger brakes. However, Hyundai is still cautious about explaining the car’s technical details.

There are rumors that the i20 N will offer 200 horsepower. Hyundai will either use the 1.6 T-GDI engine of the KIA Ceed GT or a degraded version of the 2.0 T-GDI engine in the i30 N. Although the i20 N has 257 horsepower and all-wheel drive system, it cannot compete with powerful competitors such as Toyota Yaris GR, but it will compete with models like the VW Polo GTI. The new 8-speed DCT option added to the Veloster N and i30 N can also be seen on the i20 N.

Assuming that Hyundai will follow a policy like the i30 N, we can say that the i20 N can be introduced in the next 4 months after the introduction video. The sporty model will be released in late 2020 or early 2021. On the other hand, the brand’s N series cars will expand this year with Kona N and next year with the new generation Tucson N models.

Key Features of POCO F2 Pro Revealed on a Website