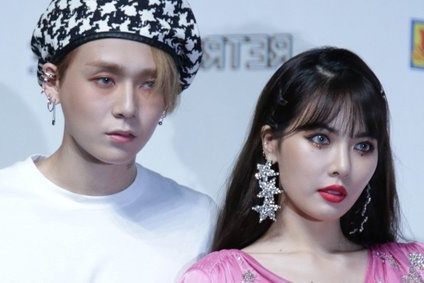 HyunA and Dawn reveal how their love inspires them to move on. The idols confessed the love and admiration they feel for each other.

HyunA and DAWN joined Dazed Korea magazine in a photoshoot and interview for the April issue, the couple who at the end of 2018 caused quite a stir by leaving their company while defending their relationship has become increasingly stronger Both have returned to music through their new agency alongside PSY and have maintained the best attitude towards the new stage of their lives.

This was visible during their last photoshoot, where the staff witnessed the love between the two idols, the photoshoot and the interview were full of compliments that both exchanged , showing not only the sweetness but also the admiration they share for each other .

HyunA has a long career compared to DAWN , however, the artist assures that one of the things she admires most about her boyfriend is all the musical knowledge she has and her interest in learning even more , HyunA assures that DAWN, in addition to being a Supporting her career by sharing her skills and learning, she also constantly motivates her.

In addition, the couple confessed that they share their love for shopping, since they are both interested in fashion and creating new styles, DAWN assures that it is something that he started doing since he was in school and, although before he frequented stores Second hand, vintage style continues at your side.

HyunA and DAWN are a couple who have long hidden their love and now they can finally enjoy their relationship openly, with nothing to hide, so both the staff around them and their followers are happy to know that they are sharing so happy moments together.

The series that Stephen King recommended us to watch