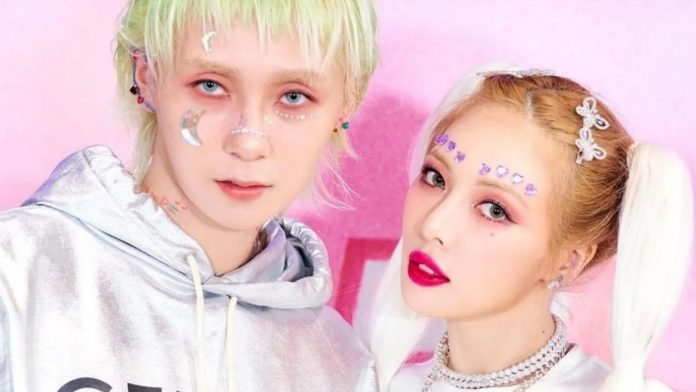 HyunA and Dawn marked a change in relationships within the industry. Do you know how HyunA and Dawn fell in love? Today we tell you the path that this couple of singers traveled.

Although now we see them very happy and even working together, these singers faced great challenges due to their relationship, but they showed that their love is really strong and valuable for both of them, do you know what is the story of HyunA and Dawn about how their relationship started? ? Here we tell you the details.

Through interviews with the interpreters we have learned more about how their relationship evolved little by little. HyunA has confessed that she was the one who first noticed the boy, since since he was a trainee he had already captured his attention.

For a long time the singer of I’m Not Cool tried to get closer and looked for any opportunity to get closer to him and have some other interaction, but that did not seem to work because Dawn did not receive the signals that she was trying to send him. The reason he didn’t pay special attention to these gestures was because he never imagined that the popular idol was interested in him, so he saw her as a great artist but not in a romantic way.

In 2017 they got to know each other better because they worked together in the Triple H sub-unit and Dawn’s perception changed, because little by little she discovered how well they understood each other, those things they had in common and all the qualities of HyunA beyond what we see on stage.

THE CONFESSION THAT STARTED HYUNA AND DAWN’S LOVE

One day the interpreter of Red contacted the singer and they soon met to have fun together, she took courage to confess her feelings but did not want to pressure Dawn, so she told him that she would wait for him so that their love could flourish. However, by that time it was no longer necessary to wait a moment longer, as the money singer also let him know how he felt.

What could be perceived as a punishment actually gave HyunA and Dawn the opportunity to live their love as they always wanted, without hiding it and enjoying freedom in their private lives? Currently, both are part of P-Nation and in addition to releasing music as soloists, they have debuted as a musical duo, who would say that their relationship would take such a positive turn for them? It was all thanks to the strength of both and the love they share.

Nikki Bella admitted that breaking up with John Cena was “painful”