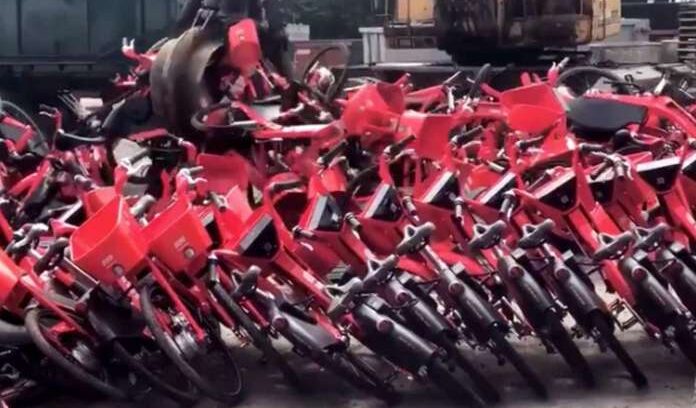 In the United States, several hundred electric bikes from the Jump rental service were sent to a recycling center when they were clearly in good condition. Why couldn’t they have a second life?

This is a very sad example of waste. At a time when the coronavirus pandemic is reshaping modes of travel and when the bicycle is enjoying a welcome boom, hundreds of e-bikes from the bicycle rental service Jump have been sent to the crusher. It happened in the United States and the images circulating on social networks caused a wave of indignation. On Twitter, several accounts have shared photos and videos showing thousands of Jump electric bikes being sent to a recycling center for shredding. These pedelecs are described as being in “perfect condition”.

The Vice website investigated and discovered that it would be part of the Jump fleet that Uber would have preferred to send to the scrap. Small summary of the story. In 2018, Uber acquired Jump to diversify. The rental service for scooters and electric bikes is available in 37 cities around the world, including Paris. But, faced with the need to drastically reduce its costs by refocusing on core business, Uber announced in early May that it was selling Jump to Lime, another player in soft mobility whose electric scooters also roam the Parisian sidewalks and lyonnais.

EXCLUSIVE: New, close-up pictures of the Seattle JUMP 5.5 fleet show that every single bike has *already had their 36V Li-Ion battery removed,* so the manpower existed to do that prior to sending them to scrap. The extent of the waste is unfathomable. pic.twitter.com/zT3nRhYNAs

Much of the Jump Park was then transferred to Lime, but not all of it. In its defense, Uber explained that it “considered donating the remaining old models of bikes, but given the many significant issues, including maintenance, liability, safety concerns and the lack of charging equipment for consumers, we decided that the best approach was to recycle them responsibly. ”

However, the Bike Share Museum site behind these revelations ensures that latest generation Jump 5.5s models are included in the pestles, which suggests that Uber’s decision is not solely related to the supposed obsolescence of electric bikes. Difficult in any case to understand why these Jump bikes could not find a second life, by being, for example, donated to associations, resold at low cost to individuals or sold in spare parts. The operation would certainly have earned less bad press for Uber and Jump.