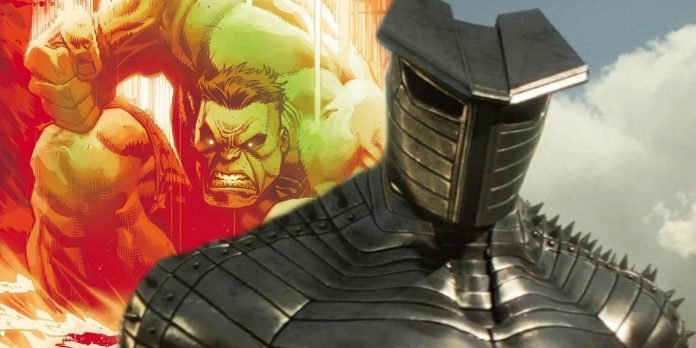 There are a few things the Hulk can’t break, but Thor’s Destroyer was one of them, as the Destroyer’s armor is a mystical weapon created by Odin himself that contains the brute, unprecedented power of the gods. However, in one particular battle, the Destroyer showed the only weakness to the Hulk, and the Hulk used this to defeat the weapon that was originally created to kill the Celestials.

The Destroyer is an autonomous armor made of Uru metal — the same substance used to forge Mjolnir —and enchanted by Odin, which only added to his physical invulnerability. As for attacks, the Destroyer is very strong, fast and can emit rays of extremely powerful cosmic energy of all kinds, including intense heat, plasma and even antimatter. The Destroyer was created by Odin after he and other elder gods of the cosmos, including Zeus and Vishnu, were afraid of the enormous power shown by the celestials. So Odin thought it wise to create an unkillable warrior of destruction, putting everything he had into creating the perfect cosmic destroyer.

In The Incredible Hulk #461 by Peter David and David Brewer, Bruce Banner returned from an alternate future where an evil version of the Hulk, known as Maestro, ruled the world with an iron tyrannical fist. However, when Banner initially escaped from this world, he was unable to return directly home, but instead ended up in hell with Maestro, where their conflict raged in perdition. As soon as Banner got out of hell, he finally returned to his original time, although he did not return alone. Maestro was also able to get out of hell and enter Bruce’s reality, although when he did, he was in an incredibly weakened state, which made it unlikely that he would be able to defeat the Hulk one-on-one. However, Maestro found a way to take over the Destroyer and immediately became one of the deadliest villains the Hulk had ever encountered-at least, he thought so.

When the Maestro attacked the Hulk as a Destroyer, the semi-intelligent armor got confused because it could not distinguish the Hulk’s spirit from the one who owned it. Since the Hulk and the Maestro are technically the same person, but from different points in time, the Hulk was able to enter the Destroyer without any problems, since the Destroyer registered them both as the same entity. The Hulk knocked the Maestro out of his armor after using his confusion to his advantage, and defeated the Maestro with his superior strength.

While the Hulk would most likely have lost to the Destroyer if he had intended to kill him, as there was no way the Hulk could have shattered his enchanted Uru armor, as well as taking an insane amount of damage from his god-level attacks. However, since the Destroyer was simply controlled by an alternate version of himself, the Hulk was able to defeat Thor’s Destroyer by discovering a single weakness unique only to this particular fight.