Home Entertainment Hulk and Doctor Strange have teamed up in a cover that should... 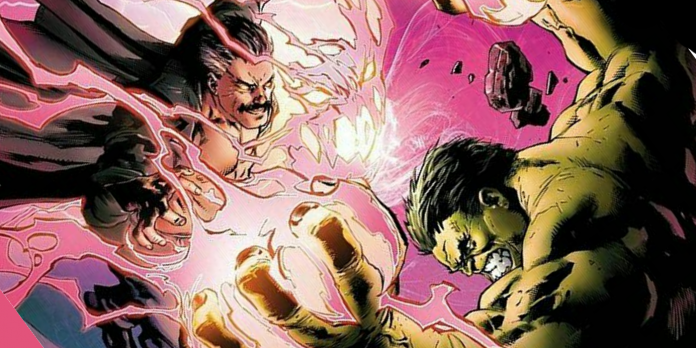 Talented comic artist Christian Ward presented a great piece of What If…? art on Twitter, saying that he has a “killer” story involving Doctor Strange and the Hulk that he would like to create one day. Ward, the artist of the recently critically acclaimed DC Black Label film Aquaman: Andromeda, has a truly magnificent and unique artistic style that would fit perfectly into a “What If…?” Marvel Comics-style story.

Doctor Strange and the Hulk always make an incredibly interesting couple in comics, and both of them are one of the purest representations of magic and science in the Marvel universe, respectively. Both Stephen Strange and Bruce Banner are doctors, and while Christian Ward hasn’t revealed any part of his “What If…?” pitch, combining these two characters would clearly lead to some fascinating stories exploring the diversity of the Marvel universe. Christian Ward’s unique artistic style, combining stunning bright watercolor effects with bold lines, allowed him to receive several Eisner Awards, and in 2019 he released his first comic book as a writer of Machine Gun Wizards. Ward is currently illustrating the acclaimed book Aquaman: Andromeda, written by Ram V., from the more adult publisher DC Black Label, giving Arthur Curry a beautiful but terrifying new costume and a dark look at the classic Aquaman character.

The beautiful Doctor Strange/Hulk What if…? The cover posted by Christian Ward on Twitter perfectly combines the bestial physical form of the Hulk with the atmosphere of the grunge magician Strange in the style of John Constantine and really excited Ward’s fans with a potential story that could come from art. What if…? Comics have existed at Marvel Comics for decades and have tended to reimagine key characters or plots from Marvel’s past, asking what the outcome would have been if something different had happened, and Ward makes it clear that he has the perfect pitch for a Doctor Strange/Hulk reimagining.

Doctor Strange and the Hulk are two of Marvel Comics’ longest—lived superheroes with a long history of both allies and enemies. They, along with Namor the Submariner, were one of the founders of the original Defenders team back in the 1970s and remained close for many years after that, mostly until the World War Hulk crossover. The massive frenzy of the Hulk was mainly directed against the Illuminati, including Doctor Strange, who, out of fear, decided to send the Hulk from Earth to Sakaar, and since then their relationship has not been restored. This relationship could become even more fractured with the potential discovery that Doctor Strange is the reason for Betty Ross’ sudden departure from the Hulk at the end of The Immortal Hulk, breaking the Hulk’s heart by transferring Betty to join the new team of Defenders without letting her say her piece. Thanks to the immediate success of the Aquaman: Andromeda series by Christian Ward and Ram Vee, as well as the critical acclaim of other recent comics such as Bloody Teeth and What’s the Furthest from Here? Honestly, it wouldn’t be a huge leap in the thought that Marvel Comics could move forward with the dark Doctor Strange/Hulk. What if…? supply.

On the topic of horror What if…? A comic depicting the down-to-earth and harsh Doctor Strange teaming up with or fighting against the monstrous Hulk, illustrated and written by multiple Eisner Award winner Christian Ward, will become an instant cult comic, and Marvel Comics should definitely pay attention to Ward’s gorgeous parody cover. artistic and plot presentation.

Fans Ask Giselle From aespa For Clarification And Apology For The...