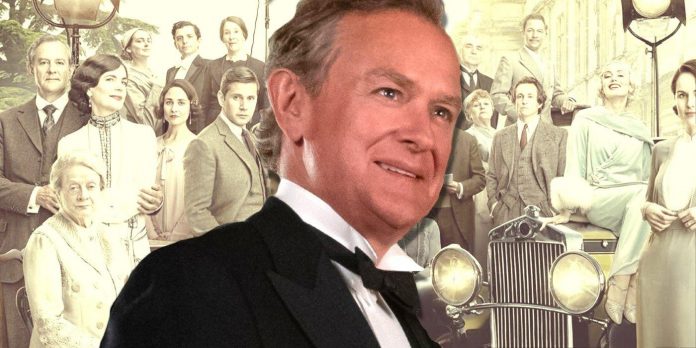 Seven long years since the final episode of Downton Abbey aired on Christmas Day, 2015 and three after the last movie saw royalty come to Downton, the Crawley family returned for what could be one final hurrah. Ushering in a brave new world, Downton Abbey: A New Era, sees Hugh Bonneville’s Lord Grantham taking center stage for a story that challenges his sense of self and identity, as well as threatening to remove his emotional foundations.

Bonneville’s beloved Robert Crawley heads the now all-star cast of returning Downton Abbey cast members – with some new additions – as an unexpected wrinkle in his story takes him to the South of France. And while Downton Abbey has arguably always been his story, Bonneville is given the most compelling storylines in the sequel, and asked more challenging questions than the show ever sought to ask. The result is a perfect balance of conflict and wholesome comedy.

Related: Downton Abbey 2’s Lord Grantham Story Beats Anything The Show Ever Did

Ahead of Downton Abbey: A New Era’s release on DVD and Blu-ray on July 5, Screen Rant spoke to Hugh Bonneville about the return to Downton Abbey, the future for Lord Grantham, his family and his staff, and a possible Bond fantasy casting…

Screen Rant: I would like to jump right in to my favorite part of the movie, which is the scene in which Robert learns about Cora’s illness. The breakdown that we see Robert have is stunning, and it’s a remarkable scene. And it occurred to me that it must have been quite liberating to be given that sort of scene. Robert is known, as a character, for being either stoic or having a soft and comic edge. Can you speak a little bit about that scene in particular?

Hugh Bonneville: That particular scene was a bit of a bummer, because we were meant to shoot it three weeks before in England. We were filming at Rogue Park, which is where we shot some of the party sequins in Bedfordshire, I think – somewhere northwest of London. We had a glorious first night shooting on the terrace with all the dancing and everything else. And then the second night we were there, the heavens opened at midnight, and we couldn’t shoot that scene.

And so, by necessity, it was moved. So, like any scene that’s got a degree of focus and some nuance to it, you need to sort of get your head into it a bit. I was all revved up, and then suddenly, you’re told to go home. We knew we had to shoot it in France with an already tight schedule. But in fact, I think it works even better, because you saw the villa in the background. The night we shot it, the weather was kinder – in fact, the weather was kind throughout France. Actually, they basically nicked some of the garden flares from Oak Park and stuck them in the garden in France, and you believe you were at the same party, which was really good.

My memory of it is more technical than emotional, given the fact that we had to sort of park it for three weeks, and then pick it up where we left off. But I’m glad it seemed to work. And it was an important thing, because as you said, it was the confluence of two or three elements in the story that were affecting Robert. He just learned about his own identity being in question, and he just now he’s just learning but his wife is potentially gravely ill. And what’s the meaning of life, frankly? It’s one of those moments.

It’s funny you say that, because my favorite of your characters across TV and movies, like Mr. Brown in Paddington and your earlier roles in Notting Hill and W1A, have this almost wholesome obliviousness which carries into Robert at times. He’s never really the victim of anything, but he has this bumbling way about him because of the progression of time and things like that. But in this movie, it feels like he’s the one that has to shoulder the dramatic weight. Because you have characters like Barrow, who generally get that sort of storyline, who gets his happy ending without the usual cost of trauma that he has to go. It shifts to Robert, in a way. I thought was an interesting change.

Hugh Bonneville: Yeah, it was. I think Julian took a slightly different angle this time around. And I think Robert James-Collier as Barrow – his storyline was curious, actually. It was a bit like people begging Julian to make Lady Edith happy during the final seasons. And she, of course, comes out better than anybody else in terms of her position in society.

For Barrow to have found happiness without too much angst – or to have found a new chapter in his life, let’s put it that way, without too much angst was really delightful. And for Robert to go through a bit was equally interesting. I think to have someone be challenged, or to have to question their very existence and the meaning of their existence at that stage in his life, is quite interesting. And I really applaud Julian for having explored it.

It’s almost as if the sequel shifts in its liberalness the same way Robert did all the way through the TV show. I know he’s a liberal conservative, but that change in the character was very marked. We watched it very much back-to-back just before we watched the second movie, and it was a stark character shift.

Hugh Bonneville: Well, that’s interesting. I can’t really comment, because I’m playing him, but I haven’t watched it as objectively as that. But subjectively, it felt natural, and it felt interesting. Robert’s always been a slight beat behind the action, and the younger generation always have to steer him like he’s in a wheelchair into the modern era. But he gets there eventually, and in this story, it came up quite starkly. That was interesting, as you say.

What really strikes when you talk to any of the cast is that there’s a camaraderie between everybody. I always wondered when I was watching whether there was any conscious removal of the two sides of the cast, or whether you are separated in any way by the upstairs and the downstairs to preserve the dynamic.

Hugh Bonneville: No, not consciously. It was just logistically; inevitably. The raucous downstairs team at Ealing could crash around Ealing Studios and have a laugh and go nick Sweeties from the reception desk and all that sort of stuff. But at Highclere, you have to be on pretty good behavior. So, I think tonally, there is inevitably a difference between the two sides of the green-beige door. We couldn’t just go and flop around on the furniture and stub our cigarettes out in the porcelain.

But there was nothing ever conscious. No sort of Mike Leigh or Method acting, where we need to keep these characters preserved in their different sections and only unleash them to see what the dynamite will be. That was never a conscious thing. It was just inevitable that there’d be a different flavor in the different sets.

To look to the future, inevitably, would you make another Downton movie? And how would you like to see Robert story play out? What are you most interested in?

Hugh Bonneville: This is a fictional world, because I don’t think there will be another one. I was thinking for a while that [there] would be; we’re all up for it, and let’s go. But I think it’s probably run its course now. And it’s been a fantastic 12 years on and off that we’ve visited this family. But I think probably enough is enough.

Were it to carry on, I don’t know where it would go next. On the basis that each of the last few iterations has been roughly taking place in a year, or during a year, we’d be in 1929. What happens then? It’s the Wall Street crash, and the gaiety of the 20s is going to come crashing to a halt. So, it’d be pretty potentially pretty gloomy. I don’t know. And as for Robert? Well, he’s gonna die. So, a good death would be good.

Yeah, the ’30s would obviously be fascinating to think of, because of the political and cultural trauma. But it almost feels like a compromise of Downton’s magic and the things that people come out for.

Hugh Bonneville: You’d have Lady Edith or Lady Mary probably thinking that that going off to meet that nice Mr. Hitler would be a great idea. You might start thinking, “Hang on, this isn’t the gang I used to like hanging out with.”

A slightly different future question, in that it’s from the past. The Gilded Age is sort of a precursor to Downton, in that it tells a different story but very much feels like it’s telling a different side of the same coin. Indulge me: if it were to sort catch up with Downton a little bit and crossover, is there anybody you would like to see play a young Robert?

Hugh Bonneville: I mean, it’s got to be Jack Lowden. He can play anything, frankly, but I’d be honored to have him play a young Robert.

An excellent answer! Dame Maggie Smith would surely be a big void on set if you were to do more Downton. How do you think Robert’s story would change on Violet’s death?

Hugh Bonneville: Oh, my goodness. I couldn’t possibly. I’m not into the world of fanfiction, so I don’t know. You’d have to ask Julian Fellowes how Robert would cope with the loss of his mother. I think with the loss of any senior character like that in a show. Would it actually survive? Is it better just to quit where we are?

But in emotional terms, I think she lived a good life. And she’d been as much a burden around his neck in later years, interfering and telling him how to run the place. I think Cora is probably the one who finds most relief from her departure. Because of, obviously, the mother-in law-dynamic. But I don’t know. I think, as the Dowager herself always says, “So long as Downton stands, that’s all that matters.”

And one final question: 25 years ago, you were in Tomorrow Never Dies. Can you allow me to start a campaign for you to play M in the new Bond?

Hugh Bonneville: I think Ralph [Fiennes]’s got that role, hasn’t he? I think I’ve gone from air warfare officer to head of MI6. That would be pretty cool.

The much-anticipated cinematic return of Downton Abbey follows the Crawleys and their staff as they welcome a movie crew and their glamorous stars to Downton for the filming of a new silent movie, while other members of the family go on a grand adventure to a villa in the south of France to uncover a mystery about the Dowager Countess and her past.