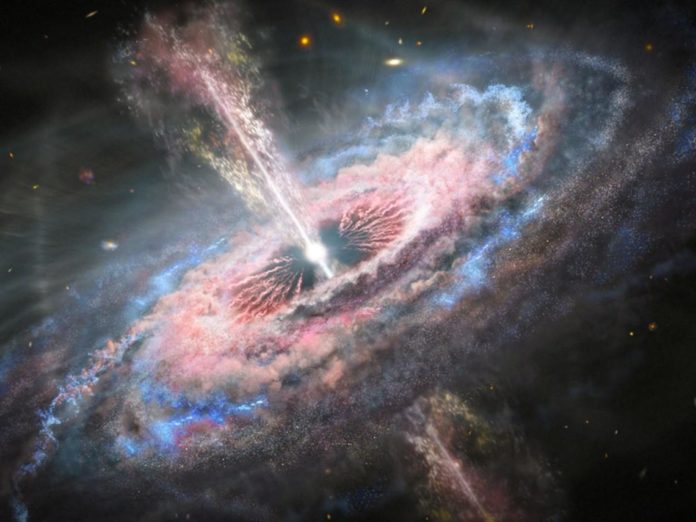 Astronomers using NASA’s Hubble Space Telescope have discovered the most energetic outputs ever experienced in the universe. The energy emitted from quasars creates a tsunami-like structure in interstellar space. On the other hand, this harms the galaxies in which quasars live.

Quasars are known to contain extremely distant celestial bodies and supermassive black holes. The quasars formed during the young and turbulent period of the universe are also referred to as galaxies shining with a high energy in the farthest corners of the universe.

While the black hole consumes the substance, hot gas surrounds it and emits intense radiation and creates quasars. Winds that swell the radiation pressure near the black hole move matter away from the center of the galaxy. These outputs go up to breathtaking speeds, a few percent of the speed of light.

The quasar ‘tsunami’ in space:
“No other phenomenon carries more mechanical energy,” said Nahum Arav, chief researcher at the Virginia Polytechnic Institute. For 10 million years, these outputs produce a million times more energy than a gamma ray burst. The winds repel hundreds of Solar masses every year. “The amount of mechanical energy carried by these outlets is several hundred times more than the brightness of the entire Milky Way galaxy,” he said.

When this cosmic tsunami hits the interstellar matter, the temperature on the shock front rises to billions of degrees, where matter largely shines in X-rays, but also shows a wide glow across the light spectrum.

Numerical simulations of the evolution of the galaxy show that such exits can explain some important cosmological puzzles, such as why astronomers observe so few galaxies in the universe and why there is a relationship between the mass of the galaxy and the mass of the central black hole. This study points out that such powerful quasar outflows should be common in the early universe.

“Both theorists and observers knew that there were some physical processes that prevented star formation in large galaxies for decades, but the nature of this process was a secret,” said cosmologist Jeremiah P. Ostriker at Columbia and Princeton University. Putting the observed outputs into our simulations solves these extraordinary problems in galactic evolution. ”