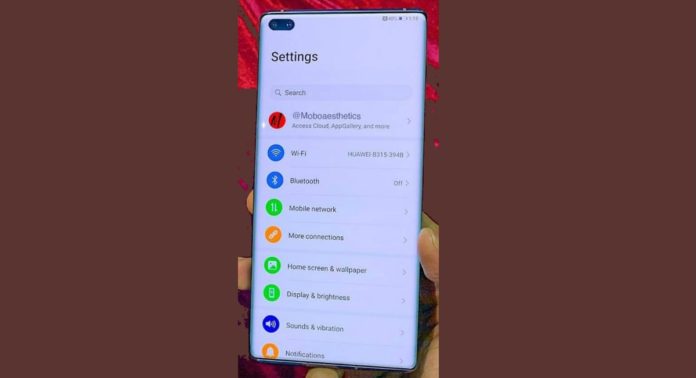 Huawei will announce its new flagship P40 with an event next month. While the P40 had been announced for about a month, a photo of the phone’s front camera design was shared online.

Huawei will announce its new flagship P40 at an event next month in Paris. News about the P40 continues to arrive, with more weeks coming to the show. In a photo that appeared in Weibo, China’s social media network, P40’s screen and front camera designs were revealed.

If the photo of Huawei P40 published in Weibo is correct, the phone will have a dual camera in the upper left corner of the screen. The P40’s dual front camera setup looks inside a pill-shaped hole. The top and bottom frames of the phone do not look very good in the photo. However, it can be seen that the device will have a waterfall screen like Mate 30 Pro.

The previously revealed information about the Huawei P40 showed that the phone would have a 6.57-inch 2K curved OLED display with 120Hz refresh rate. The P40 will feature a Kirin 990 processor and Balong 500 5G modem.

The 52MP main camera, made exclusively by Sony, will be accompanied by a 20MP ultra-wide-angle lens and a 12MP telephoto lens. Huawei’s new flagship battery with a capacity of 5,500mAh will also be charged in 45 minutes with 50W fast charging support.

Perhaps the most curious information about the Huawei P40 will be the operating system of the device. According to the information conveyed by Huawei officials, the device is likely to come with HarmonyOS.

Update: A user on Twitter claimed that the news was unfounded
By sharing the entire photo, the user on Twitter made a statement saying, “If this sharing were true, it would have caused the emergence of the new iPhone, not the Huawei P40.”