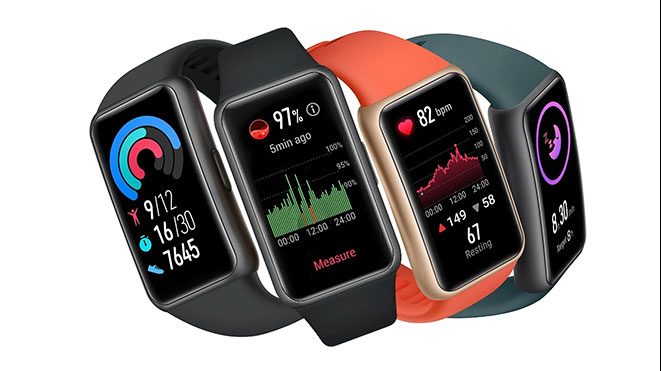 Huawei Band 6 has a 1.47-inch AMOLED display. This screen offers a resolution of 368 x 194 pixels. Considering that the Huawei Band 4 has a 0.96-inch LCD screen, it can be said to be a good leap forward in this area. There is a growth of 148 percent on the screen.

A large number of dial options are offered to users in the smart bracelet. These dials can be accessed through the Watch Face Store. In the new design, the thinning of the screen frame also draws attention. The screen-to-body ratio goes up to 64 percent. Unlike Xiaomi, who prefers a capsule-shaped design, it is noteworthy that Huawei does not give up the traditional rectangular design.

Huawei’s newest smart bracelet weighs 18 grams without straps. The body of the smart bracelet is 43 × 25.4 × 10.99 mm. in size. There is only one button used in navigation on the edge of the clock. The smart bracelet, which is water resistant up to 5 ATM pressure, has a battery life ranging from 10 to 14 days. Huawei also emphasizes that 5 minutes of charging will be enough to run Band 6 for two days.

There are three color options for Huawei Band 6: orange, green and black. Compatible with Android 6.0 and iOS 9.0 above devices, the wristband supports Bluetooth 5.0. The price tag of Huawei Band 6, which is put up for sale in Malaysia, says 219 Malaysian ringgits.

CarKey: The Feature On Iphone Is Coming To Android Devices!