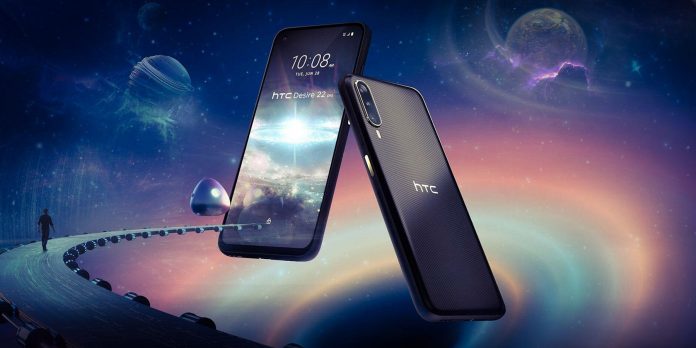 The latest smartphone from the yet-to-die HTC is the Desire 22 Pro, a strictly mid-range device that is said to be a companion for its Vive VR glasses and comes with a free cat NFT stored in a local wallet. HTC has been teasing its own metaverse phone for some time, apparently trying to cash in on the cryptocurrency and NFT boom, which has gone dramatically bankrupt over the past few months.

But the Taiwanese company apparently has long-term plans for the VIVERSE, its own phrase for the idea of a metaverse built on the basis of VIVE XR hardware. HTC released the VIVE Flow VR glasses at the end of last year, and they will play a role in realizing the ambitions of the VIVERSE associated with the company’s latest smartphone.

Get to know HTC Desire 22 Pro, a phone with average specs and a versatile design with a bright pattern on the back. The phone is equipped with a Snapdragon 695 chipset and is equipped with a 4520 mAh battery with 18W fast charging and, surprisingly, wireless charging. It offers a 6.6-inch FHD+ display (1080 x 2412 pixels) with a refresh rate of 120 Hz and a cutout in the corner where the selfie camera is located. At the back is an array of three lenses with a main 64-megapixel sensor, next to which is a 13-megapixel camera for ultra-wide-angle photography and a 5-megapixel depth camera. Responsibilities for selfies and video calls were assigned to a powerful 32-megapixel sensor.

The key advantages of the phone are its VIVERSE. The Vive app allows users to pair the Desire 22 Pro with Vive Flow virtual reality glasses. When connected to a wearable device, users can transfer content from their phone screen to virtual reality glasses. HTC claims that virtual reality glasses will allow users to stream Netflix, Hulu and Disney as if they were watching content on a 300-inch screen. However, the company did not specify the compatibility of applications that can be transferred from Desire 22 Pro to Vive Flow VR glasses via HDCP stream. The VIVERSE tool is a place where users can access their NFT and other digital assets. Speaking of NFT, every buyer will get one with a Renaissance cat image as a freebie.

This also leads users to the VIVE market, where they can spend their cryptocurrency tokens associated with the Ethereum and Polygon blockchain. HTC makes loud statements about the capabilities of the 3D-based metaverse in its mid-range phone, which has an IP67 protection case. The phone will be sold on HTC’s domestic market starting next month, but there is no official information about international availability. Judging by the previous releases of HTC smartphones, it is unlikely that this phone will ever appear on the US market. HTC is asking for about $400 for its metaverse-loving phone, while a limited edition kit including VIVE Flow VR glasses will cost just over twice as much as a standalone phone package.

A strong warning from the ECB administrator DOGE and these altcoins!

Critical Day Today For These 11 Altcoins: Here’s What They’ll Be!