Home Entertainment How Winnie the Pooh appeared in Fallout 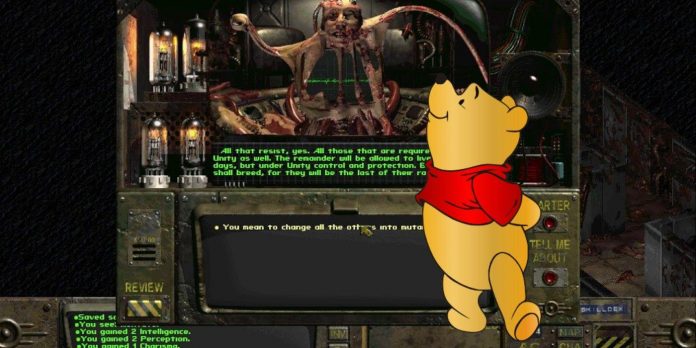 The voice of Winnie the Pooh also voices the terrible final boss in the original Fallout: A Post Nuclear RPG. In the original Fallout from Interplay and Black Isle Studios, there was one of the most stellar voice compositions of its gaming generation, and screen and voice actors occupied every corner of the game. This includes Cree Summer, Keith David, Clancy Brown, Ron Perlman, C.C.H. Pounder and, of course, Jim Cummings.

Jim Cummings began his voice acting career in 1984, quickly becoming one of the most prolific actors in his field. Cummings has appeared in films, TV shows and video games of all kinds. However, his most notable role to date is Winnie the Pooh and Tigger, who replaced Hal Smith in 1988. He is now the primary voice of both characters, even appearing as both in the recent Disney action movie Christopher Robin.

Related: New Vegas 2 Should Be Anything But Another Fallout 4

Fallout is no stranger to famous actors in their games. Anyone who checks Fallout 3 now that the Microsoft live bug has been fixed will find, for example, Liam Neeson in the role of the protagonist’s father. However, it often comes as a shock to learn that the voice of Winnie the Pooh also played a mutant monster at the end of the original Fallout. The two characters really couldn’t sound more different.

The sharpness of the difference between these two voices indicates the nuances of voice acting. This goes beyond the fact that one sounds mean and the other sounds cute, as both voices have layers that give them a texture that is guaranteed to remain in the mind of whoever hears them. The fact that Cummings has been the default voice of Winnie the Pooh for decades is proof of this. Cummings’ voice, for Pooh, naturally has the warmth and innocence of a man who doesn’t have to live in a city built around an atomic bomb. However, it also adds a layer of curiosity and slight excitement that act as the secret weapon of what makes Jim Pooh’s voice so appealing. Pooh is excited every day, and it radiates from his every word.

Meanwhile, the Master is not warm at all. For example, Jim’s voice is just one of many voices discernible in the jumble of incoherent voices that make up the “Master”. Jim plays a man once known as Richard Moreau, as a man who has lost both humanity and reason. He created super mutants in the first game, much more intelligent and dangerous than the super mutants from the Bethesda games, and his voice reflects the madness and selfishness that brought such monsters into the world.

Jim Cummings has been voicing beloved cult characters like Winnie the Pooh for a long time, and yet his career is so diverse that it’s not surprising to hear him in such a dark and gloomy game as the original Fallout. The fact that Jim Cummings can so easily merge with two completely different voices speaks volumes about his skill as a voice actor. Fallout: A Post Nuclear RPG just wouldn’t be the same without him as the Master.

Who are the real villains in “Miss Marvel”?