Home Entertainment How will Starfield’s skills and traits work compared to Skyrim and Fallout... 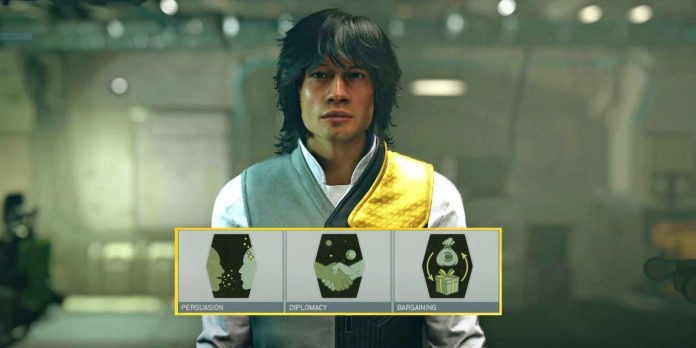 Starfield’s skill and trait system is similar to the leveling and distribution of perks in Skyrim and Fallout 4, but the game also has its own unique features when it comes to this area. During the Xbox and Bethesda Showcase on June 12, Todd Howard showed the audience the very first trailer of the Starfield gameplay, which had many intriguing details, including a new system of skills and traits that players will receive after the launch of the RPG in early 2023. However, in the character creation section, only a short fifteen-second excerpt was shown that dealt with the new system; however, it was enough to understand how it works.

As you can see from the gameplay trailer, the process of creating a character in Starfield begins with players choosing a backstory and three traits for their main character. The chosen background gives players three initial advantages depending on what they choose, while traits give certain advantages and disadvantages that accompany the player throughout the game. The expanded disclosure of the Starfield gameplay also demonstrated a completely new skill tree that is separated from the background and traits. In the traditional Bethesda manner, this skill tree allows players to continually improve their abilities in various ways; it also brings back a four-tier ranking system in the skill tree, making skills even more powerful than their original advantages. Starfield’s skill and trait system borrows aspects of both Skyrim and Fallout 4, but it remains to be determined if it is better than the other two.

There is no doubt that the way Starfield first gives players traits and then rewards them with skills is the most challenging and daring system ever seen in Bethesda role-playing games. Skyrim and Fallout 4 have their own unique systems that reward players as they level up, and in Starfield clearly shows some of their footprints. Despite the fact that there are many similarities between the systems of all three games, there are some key differences that are worth paying attention to.

Starfield and Skyrim have similar development systems for leveling skills

Starfield and Skyrim use a similar skill tree development system. In fact, there are various skill groups that players can constantly improve, earning points as they level up to spend them on a tree. Not surprisingly, Bethesda brought back this type of skill development system, as it was one of the most beloved elements of the game (Skyrim), and it worked well with the role-playing format, allowing you to mix and match game styles. The Starfield skill tree will obviously offer the same, if not more, freedom and customization options. Indeed, Starfield and Skyrim had some similar moments during the gameplay demo, and Bethesda’s DNA was clearly spelled out in all of this. This is not necessarily a bad thing: respecting what has been successful in the past while continuing to push new boundaries is the key to healthy evolution, and it seems that this is exactly what Starfield is striving to achieve with its familiar but fresh skill development.

However, not everything in the systems of these two games is the same. The main differences between the Starfield and Skyrim skill trees are in the categories offered and the types of privileges that players can earn. For example, in Skyrim there are three comprehensive areas of improvement — warrior, mage or thief — which then break down into an umbrella, where each area has six specific categories of unique improvements. Starfield, on the other hand, looks like it’s cutting out certain areas of improvements and going straight to improvements of various categories. With a huge Starfield universe consisting of 1000 planets, this will work better, because there will definitely be various areas that players will want to improve throughout the passage, without feeling that they need to sacrifice something for a certain style of play. However, it is not currently confirmed whether Starfield offers more skill categories than the eighteen in Skyrim.

Despite the fact that there is not much similarity between Starfield and Fallout 4, at least when it comes to the skill system and traits, they have one quality in common. Both games have a ranking of earned skills and perks, which means that players can continue to improve the same skill to make it stronger over time. While it’s not the best feature of Starfield and Fallout 4, it’s still part of Bethesda’s plan to incorporate the best of both previous games into its newest and most ambitious RPG. In Starfield, skills can be upgraded a total of four times, and players can choose whether they increase their rank or want to unlock new ones instead. In Fallout 4, the rank of skills and perks increases along with the level increase, which reaches ten levels and a four-level ranking system.

DC FanDome 2021 – All Panels And Guests With Robert Pattinson,...

Insomniac Games is looking for staff for a multiplayer project