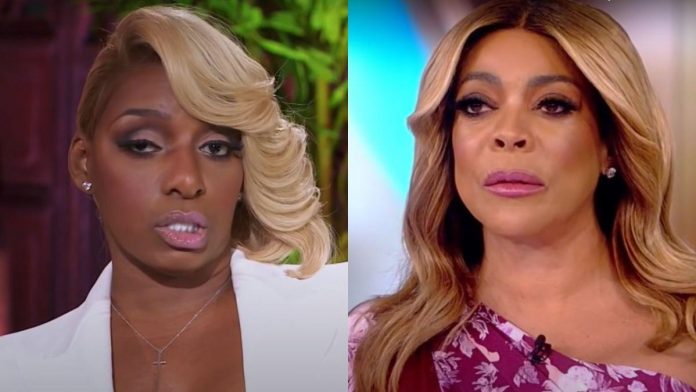 Once upon a time, talk show host Wendy Williams and reality star NeNe Leakes were actually pretty good friends. They would even make appearances on each other’s shows – i.e. Williams’ now-defunct namesake on daytime TV and Leakes’ former broadcast home, The Real Housewives of Atlanta. However, the two have very different career situations nowadays, and that’s not the only thing that’s changed. Their friendship also happens to be over, thanks to a pretty wild falling out. According to Leakes, the beef supposedly saw her lose an entire TV series that was once in the works, too.

The bad blood between the two celebs seemingly dates back to an incident in 2014 concerning a pricey Birkin bag. NeNe Leakes famously jumped on the growing trend to “deface” the purse (meaning, to basically graffiti on it). The final result is still live on her Instagram, and one of the scrawled-on phrases seemingly was a pointed shot fired at Wendy Williams. More on that in a second. Take a look at the post here:

Per reporting by Page Six at the time, the host made a shady remark on her talk show that her supposed friend couldn’t afford to deface such an expensive item. The Real Housewives star then hit back later on that she was the “lowest of the low” for “spewing hate.” She also interestingly noted that the talk on the streets that she had allegedly “slept with” Williams’ then-husband perhaps played into the host’s commentary (the bag makes mention of closing one’s legs to “married men”), but the reality star was definite about the affair rumors being untrue.

To make matters worse, though, the 54-year-old NeNe Leakes brought up how she was in early talks with Debmar-Mercury, the production company behind The Wendy Williams Show, to headline her own talk show alongside Tom Arnold. Namely, she’d written about Williams: “you’re scared I will take your place (I know you have heard! Ummhmm win wink) BE SCARED!”

The perceived gloating was believed to be the real reason that the NeNe Leakes-led show never materialized. After all, with Wendy Williams being Debmar-Mercury’s biggest moneymaker for years, throwing darts at her didn’t seem wise. Yet Leakes is under the impression that it was one of her more innocent Birkin bag comebacks from the past that was the final nail in the coffin to her potential project. She told Page Six recently:

I responded by saying something like, ‘Now, Wendell, I have four Birkin bags, and I can do the same. Wendy didn’t like it. Debmar-Mercury pulled the deal and stopped all communication with me. Our deal went dead.

For his part, Tom Arnold attested to the outlet that Debmar-Mercury wanted his and NeNe Leakes’ endeavor to air in the time slot right after The Wendy Williams Show. But in the wake of the purse debacle, the plans suddenly went up in smoke. Arnold, a former star on Roseanne, supposedly spoke to a Debmar-Mercury producer about the rationale behind the decision, who allegedly said to him:

She called me and said, ‘I got some bad news. We can’t do the show.’ And I said, ‘Why?’ And she said, ‘Because NeNe made fun of Wendy Williams’ purse.’ And I go, ‘Who would care about somebody making fun of their purse?’ And the producer said, ‘Black women care.’ She explained to me it was a very personal thing. It was a big deal. She said, ‘Wendy has the No. 1 show. What if Roseanne [Barr was put in the same position]?’ I go, ‘Yeah, I guess she probably would get upset about somebody saying something about her purse.’

He continued that RHOA alum was “unrepentant” for her side of the situation but also thought that Wendy Williams was possibly feeling “competitive” with her former bosom buddy. Tom Arnold thinks it’s somewhat understandable that the show got axed as a result because “the best way to get rid of your competition is to fire them.” Nevertheless, Arnold is “absolutely” still down to do the original TV show idea with his former collaborator if given the chance again.

What Are The Latest Controversies For Wendy Williams And NeNe Leakes?

Irony of ironies, Wendy Williams has obviously lost her own TV show in the intervening years since this reported feud first took place. Debmar-Mercury pulled the plug on The Wendy Williams Show back in February after months of guest hosts filling in for the namesake while she battled ongoing health issues. The company also decided to replace the 57-year-old with Sherri Shepherd in the same time slot for her own self-titled talk show (slated for release later this year on the 2022 TV schedule). The changing of the guard, to include only featuring Williams in the finale episode via tribute video, was viewed as bad form by her now-ex-husband.

The other irony at play here is that NeNe Leakes is still having controversial beef with her ex-friend and networks to this day. After the the former host appeared on Watch What Happens Live back in 2020, where she again shaded Leakes’ finances, the ex-Real Housewives star had her own words but mainly accused the Bravo network and Cohen himself of being racist. The drama seemed to die down for a time, with Leakes making hints that she was interested in returning to RHOA for another season. But in another sudden turn of events, she decided to file a lawsuit against Bravo and others in April over alleged discriminatory practices during her time on the reality series. (To boot, she herself is facing more accusations of affairs with married men — this time in a lawsuit coming from her current boyfriend’s wife.)

The Bravo lawsuit might be seeing a resolution sooner rather than later by some reports. However, it’s not looking like the feud between NeNe Leakes and Wendy Williams will be similarly repaired so easily or so soon.