Home Entertainment How was Daddy OJ killed by an alien in Nope? 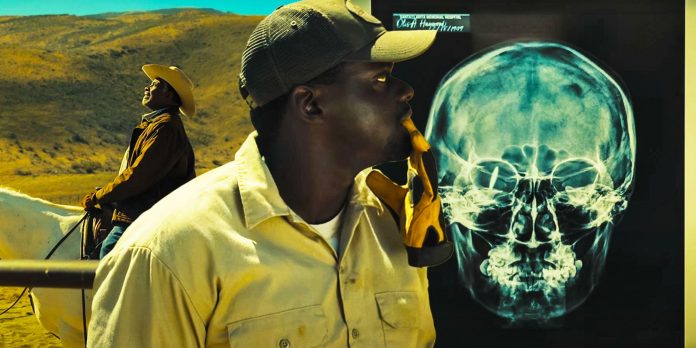 The supernatural occurrences at Haywood Ranch truly kick off when OJ’s dad, Otis Sr., is suddenly killed by Nope’s alien. 2022’s Nope is Jordan Peele’s third directed movie, following the successes of the horror thrillers Get Out and Us. However, Nope’s protagonists aren’t necessarily running from the terrors of other people like in Peele’s past projects, as OJ Haywood (Daniel Kaluuya) and his sister Emerald (Keke Palmer) are up against a predatory unidentified alien.

The origins and nature of Nope’s mysterious alien aren’t revealed within the movie, but its angel-like true form, feeding habits, and predatorial motivations near Haywood Ranch are soon discovered. The alien, which OJ and Emerald nickname “Jean Jacket,” has been regularly fed by Ricky “Jupe” Park (Steven Yeun) at the nearby theme park Jupiter’s Claim, having discovered that Haywood Ranch offered it plenty of food with their horses. However, since Nope’s strange alien eats by seemingly beaming up its prey, it ends up feeding on anything in its path, whether that be horses and people or, unintentionally, inorganic objects.

Related: What Jordan Peele’s Next Movie Is (After Nope)

At the beginning of Nope, OJ’s dad is abruptly killed while riding his horse, Ghost, with the X-rays revealing that a nickel had somehow gone straight through his eye and into his brain. While this shocking death aligned with OJ’s monologue about “bad miracles,” Nope later suggests that the alien hadn’t intentionally killed Otis Sr. Rather, the alien can’t digest inorganic materials like coins, so the creature spits back out what it can’t eat As such, it was poor luck that OJ’s dad happened to be in that exact spot at the Haywood Hollywood Horses ranch, as Nope’s nearby UFO had simply been rejecting the nickel that it couldn’t feed on.

Why OJ Kept The Nickel That Killed His Dad In Nope

Following the death of OJ and Emerald’s dad, Daniel Kaluuya’s Nope character keeps the nickel that killed him in a small Ziploc bag. He often looks back on it and remembers his dad, but can’t really understand how a nickel that fell out of the sky from nowhere could have killed him. The doctors and OJ himself are in awe of how the coin killed his father, so OJ likely kept it as a reminder that the supernatural occurrences around the Haywoods’ ranch may be amazing, but they can also have horrific consequences. Even Emerald questions why OJ kept the nickel considering it had been lodged in their father’s brain, connecting to the sickening desire for souvenirs of tragedies.

In a much more gut-wrenching explanation, the Nope movie’s lead character OJ Haywood may have simply kept the nickel because it was the last piece of his father. It was also what killed his father, but since it’s a coin, OJ can’t get any vengeance or reasoning for why this happened. All he can do to understand the “bad miracle” of his father’s death is to stare at the coin and wonder how it fell, why it had to go straight through his father’s eye, and whether there was a larger meaning behind his father’s tragic fate. While keeping the nickel may seem morbid, getting rid of it also has a somber tone, linking with the idea of the spectacle of tragedy.

The Real Meaning Behind The Nickel In Nope

The nickel is the first introduction to OJ’s “bad miracles” and the dangers of society’s obsession with the “spectacle” in Nope, as it’s no coincidence that the coin is lodged through Otis Sr.’s eye. Had Otis not looked up to the sky to see what was lurking, it’s possible that he could have survived. However, his punishment for needing to look and see wasn’t subtle in the least by the coin going straight through his eye. The fact that OJ kept the nickel in Nope also connects to the societal spectacle of tragedy, wherein artifacts and reminders of these catastrophic events are often senselessly monetized, such as how Jupe capitalized on his traumatic experience with Nope’s Gordy the chimp.

Related: Why Was The Shoe Standing Up In Nope? What It Really Means

More than just “spectacle,” the themes of Jordan Peele’s Nope relate to the cinematic spectacle, particularly how filmmakers and studios have prioritized the need to make their movies something that audiences have to see. This ties back to the nickel that killed OJ’s father in regard to the early days of cinema, with “Nickelodeons” being the first indoor display area dedicated to projecting motion pictures. The first movie theaters, A.K.A. Nickelodeons, were named such because it only cost a nickel to see one of the moving pictures, which primarily catered to working-class viewers.

It’s no coincidence that the nickel went through the middle of OJ’s father’s eye standing up straight, mirroring the process of putting a nickel into a slot machine. The meaning of the nickel – and similar mysteries throughout the Nope movie – is also to symbolize how society has always paid to see unbelievable spectacles, just like people placing a nickel into a Nickelodeon machine to watch moving pictures. Modern cinema began with the notion of Nickelodeons and consequently established the importance of the “spectator,” so Jordan Peele’s Nope uses the nickel that kills OJ’s dad to make the logical jump to how today’s cinema has grown to be dangerous for viewers due to its focus on the spectacle.