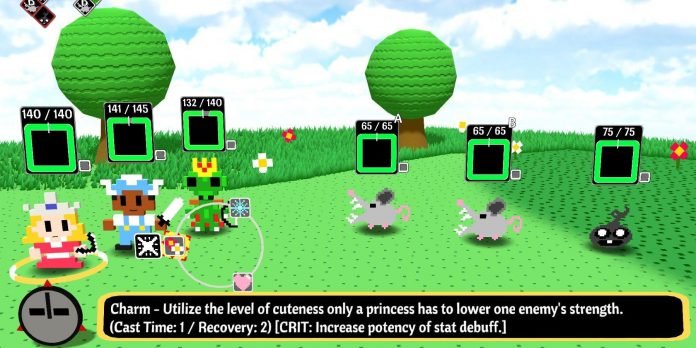 Game developer and founder of Momiji Games Matt Sharp wanted his latest Video Game Fables to be a really good classic turn-based role-playing game, but with many basic combat features improved. This included rethinking critical hits, timers, and other combat dynamics. Although turn-based role-playing games have been around for decades, not all of them are very different from each other when it comes to battles.

Video Game Fables is inspired by some of the best turn-based role-playing games, including games from the Dragon Quest and Final Fantasy franchises. However, the creator of the game wanted to offer players something new, unique and ultimately better in terms of combat mechanics than what the classics can offer. This will allow players to be engaged during the battle, rather than clicking on a predefined pattern of their favorite power moves.

The first major change that Sharp implemented to distinguish Video Game Fables from a traditional turn-based role-playing game was a change in critical hits. Almost every role-playing game handles critical hits the same way. Whenever a character hits an opponent or uses a skill, there is a small chance to create a more powerful version of this attack. Often this chance is reduced by design, although it may be possible to increase it with the help of equipment, such as in Genshin Impact. However, instead of this tiny chance to land a critical hit, Video Game Fables offers frequent critical hits that instead work as a resource. Sharp wanted this dopamine-releasing mechanism to work harder.

“It helps the player pay more attention and makes you feel like you’re much more involved in the battle than in a classic turn-based RPG.”

In the Video Game Fables, critical hits are dealt by each character’s base attacks at about 40%. On average, every two or three basic attacks are accompanied by satisfactory CRIT graphics and a corresponding sound effect. In addition, Video Game Fables critical hits do not cause instant additional damage. Instead, the character responsible for the CRIT gets a resource that is saved for later use. Only one of these CRIT resources is stored as a token for each character, which is recommended before using another base attack. According to Sharpe, he considers this feature a mini version of Limit Break from Final Fantasy. A critical hit makes the following non-base character skills more powerful. This is not always a direct increase in efficiency. While an attack skill can deal more damage, an acceleration skill can target the entire group rather than a single target.

The round timer in Fables video Games is not punitive

The second major improvement of Video Game Fables over classic turn-based role-playing games like Shin Megami Tensei is the more encouraging circular timer. A timer keeping players at a certain pace is nothing new, but how Sharp implemented it matters. Instead of a standard round timer that requires the player to use their abilities and skills for a certain period of time, Video Game Fables encourages players to use their skills earlier and get rewarded for their quick thinking.

According to Sharpe, this feature was created both for better accessibility and to improve combat. He understood that some of the most difficult role-playing games ever released were too difficult for the average player, but he didn’t want the game to be without problems. Refusing to punish the player after the timer expires lowers the entry barrier, while at the same time providing bonuses for players planning ahead and thinking on the go, which makes the battle more intense and rewarding. The timer has different phases with color coding, and the best reaction time — hitting a green piece of pie — can increase the efficiency of the ability by 20% after the time has elapsed.

“Why would you use poison when a) it has a 5% chance of hitting and b) it deals one point of damage per tick when you could just drop fire and fire at the enemy with one shot?”

Sharp’s goal in combat was to fix some age-old problems with role-playing games. He was concerned about issues such as poison damage, which was almost always much less viable than other forms of elemental damage, and the weakness of other status effects. Although the game is not the only role—playing game with a unique poisoning system, it is certainly in the minority. That’s why he spent a lot of time focusing on basic calculations and formulas to make sure that the balance of the game is at the right level. Poison does more damage if it goes its own way, and buffs and debuffs are very effective, even exceeding the best bonus per round. Thanks to these changes, Sharp managed to make the game not only more challenging, but also more exciting.