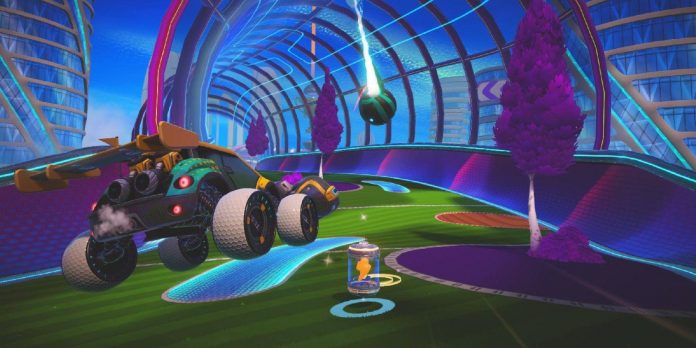 The indie gaming market is bigger than ever before: countless games are released every year, surpassing the entire spectrum of video game genres. While some indie genres are much more popular than others, for example, Soulslike, roguelike and platformers often work very well, there are always games that seem to appear out of nowhere and bring something completely new to the video game landscape. Rocket League was one of those games, and this year’s Turbo Golf Racing was another.

Released in 2015, Rocket League was an immediate success. Combining racing and sports genres, Rocket League was able to attract a huge number of players, and thanks to its simple management, it is easily accessible to all fans of video games. Given the huge popularity of Rocket League, it was only a matter of time before other games would begin to directly influence its formula, and the recently released Turbo Golf Racing is an outstanding example.

Released in early access just a few days ago, Turbo Golf Racing uses the general gameplay formula and mechanics of Rocket League, and also makes some interesting changes. Having replaced football with golf, it is quite natural that Turbo Golf Racing will have to change its mechanics so that it is best suited for this sport, but its backbone is very similar to Rocket League.

In a typical Turbo Golf Racing match, a player crashes his car into an oversized ball, launching it along a forward-facing trajectory. The player will then need to catch up with his ball and keep bumping into it until it eventually falls into the cup. The player who managed to score the ball faster wins the match. Although the basic gameplay formula is slightly different from Rocket League, the general idea is similar and the mechanics are almost identical.

During the match, players will be able to use boosters to gain an advantage over opponents, and can crash into opponents to try to knock them out of the way. The controls in Turbo Golf Racing will be familiar to Rocket League fans, and players have the opportunity to launch their car into the air. Interestingly, players also have the ability to glide through the air, which is a pretty unique mechanic.

Although the controls may not be as responsive as in Rocket League, there is the same immersive gameplay and the same high level of accessibility. In fact, Turbo Golf Racing can be even easier than Rocket League, since most of the action takes place in front of the player, since on most courses the player is simply required to move forward. Such a high level of accessibility ensures that almost any player can enjoy the game, regardless of their skill level.

Inspired by crazy golf, Turbo Golf Racing can also get creative with the design of its course. While a significant portion of Rocket League maps are quite simplified, often a square field with gates at both ends, as well as a small set of scenery, Turbo Golf Racing courses are sometimes a little more exciting. Various paths are often open to the player, acceleration rings in the sky propel a well-placed ball further, and foliage and rocky terrain can make the player think strategically about how to effectively overcome obstacles while keeping track of the ball. It’s fair to say that while Turbo Golf Racing definitely draws inspiration from the Rocket League formula, it creates its own structure.

How Do You Correctly Say BTS’s Fanchant At Concerts?

Ewan McGregor was horrified by his role as the real designer...