Did US President Donald Trump affect the Bitcoin price with his tweet on the economy stimulus package? According to the analysis shared by Santiment, with the effect of Trump’s tweet, the Bitcoin price has reached its bottom. While uncertainties about the direction of the Bitcoin price have prevailed recently, this development has prompted analysts.

Following Santiment’s analysis, Cole Petersen, who shared an article in Bitcoinist, explained that the expected trend direction move for Bitcoin could come at any moment. He said that he expected especially the discussions on the economic stimulus package, which is on the agenda of the USA, to trigger this move. Petersen states that although the exchanges do not have a one-to-one correlation with Bitcoin, they will reflect on Bitcoin prices in the short term with the economic changes seen in the US.

According to Petersen, while Bitcoin continues to trade between $ 10,200 – $ 11,200, the inability of investors to determine the market direction has not been effective in driving prices up. While the recovery seen in the US stock markets on Thursday, October 8 is expected to move Bitcoin upward, the Bitcoin price has remained at the same level. But the expected move for BTC may come soon, according to the article.

After President Trump’s announcement about the economy stimulus package on Twitter, Santiment company, which conducts crypto money analysis, announced that the bottom of the Bitcoin price has been seen. According to the company, President Trump and his tweets have the effect of dominating the Bitcoin price as well as the influence of traditional markets. Santiment explained his analysis with the following sentence:

“Did Trump’s statements about the stimulus package point to the bottom in Bitcoin? According to our data, BTC rose from $ 10,550 thousand after Trump’s announcement and gradually increased. ” 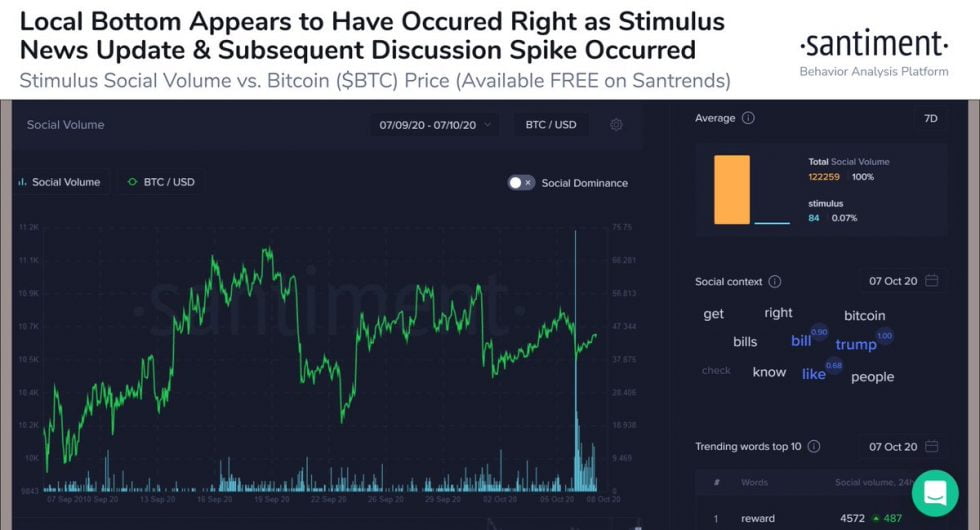 How long has Bitcoin been?

Currently, the Bitcoin price is at $ 10,881. Bitcoin, which has been traded at these levels for the last few days, continues to be priced in the range of 10,500 – 10,880 USD. Without breaking this key level, the short-term outlook will remain uncertain, Petersen says.

Cardi B Has Filed for Divorce From Offset

Kelly Vedovelli is outraged at the Sad World Twitter network

The highlights of the TCL 10 Plus! Here are the features

Buying on the Internet: the pitfalls of buying abroad

What is Mercatox? What Does It Do?

Attention: According To Analysts, This Altcoin Will Be Down!