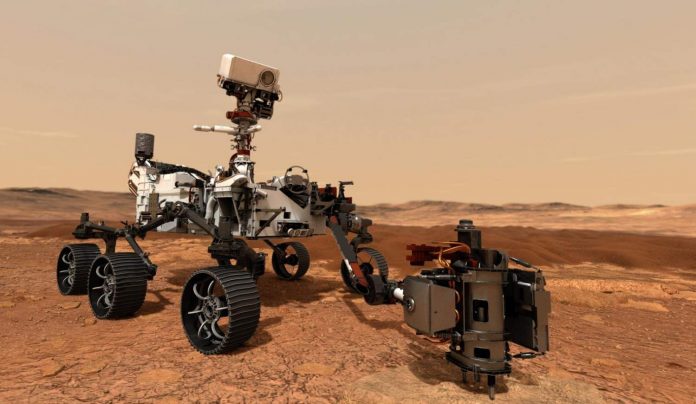 The Mars 2020 spacecraft Perseverance is preparing to make an exciting landing on the red planet in the coming hours. If everything goes as planned, a very long journey will end successfully. Perseverance, who set off from Earth on July 30, 2020, traveled about 204 million kilometers and reached Mars.

Of course, Perseverance is not the first Mars rover, but we can definitely say it is NASA’s most sophisticated and masterful spacecraft. With its payload of seven scientific instruments and 19 cameras, the explorer will provide scientists with unprecedented views of both the Martian surface and gold as they try to unravel the secrets of the planet’s origin. However, the most exciting part of the task is that it is designed into pieces to separate from each other.

It will also bring down a helicopter called Perseverance Ingenuity to the surface. This will leave the spacecraft to the sky, send down images of the Jezero crater that NASA is planning to land on, and help plan for future missions. If successful, it will be the first example of the motor flight that mankind has accomplished on another planet.

Although Perseverance was designed to run on Mars for a period of time, its legacy will last longer. One of the mission’s goals is to collect samples from the surface and below, pack them in special containers, and then leave them to be collected on a future Mars mission. These collected samples will then be sent back to Earth for analysis. However, this is not expected to happen until sometime in the 2030s.

This journey, which will only take a few minutes, seems to be quite tense and exciting. but it’s a pretty sad journey. Entry, Descent and Landing begins when the spacecraft reaches the Martian atmosphere. The landing vehicle moves at this point at a speed of approximately 20,117 km / h. It slows down at atmospheric friction for about 90 seconds, and a large parachute opens about 9.5-13 kilometers above the planet’s surface. At this point, the vehicle is expected to move at a speed of 1500 kilometers per hour.

When the speed drops to 579 km / h at an altitude of about 6.4-11.3 kilometers, the heat shield separates. The spacecraft then opens the next minute or scans the ground to find a final safe landing point. At this point the rear shell separates and the motorized descent begins, the rover is moved to a separate ship and then lowers it to the surface on the “Sky Crane” before flying.

There is a lot of work to be done properly here, and Perseverance will have to do them himself. The entire landing process is pre-programmed, as it will take a signal over 11 minutes to reach Mars from Earth.

You can watch Perseverance’s landing mission on Mars via the video below: