Home Entertainment How to Schedule a Text message on iPhone 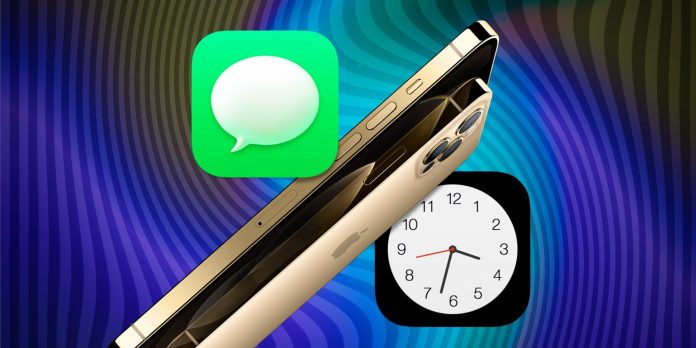 The iPhone can send scheduled text messages, although Apple has not built this capability directly into its Messages app. The ability to schedule the date and time of sending a message opens up new possibilities. For example, reminders to friends and family can be planned in advance, and ideas that may appear in the middle of the night can be sent during business hours.

The Apple Messages app is quite versatile and fascinating, allowing Apple users to easily communicate on any of their devices, from iPhone to Apple Watch, iPad or Mac. Notes and effects add charm, and pinned messages and the “Available to You” feature simplify organization. It is also possible to send a text to an Android device, but some functions on these phones will be different.

Related: How to Block Spam Texts on iPhone

Apple doesn’t include scheduling as a built-in option for the iPhone’s Messages app, despite many other great features. Fortunately, it’s easy to set up with another built-in iPhone app. The Shortcuts app is a great way to automate work on the iPhone by integrating it with many other apps created by Apple and other developers. With shortcut automation or a more advanced shortcut like delayed iMessage, all that is needed is the time and date the message was sent along with the recipient and the contents of the text message.

When a message needs to be sent, but it’s better to wait, you can set the future time by automating iPhone shortcuts. The user can open the Shortcuts app, tap the Automation tab, and then tap the “+” symbol in the upper right corner. After that, click “Create personal automation”. You need to select the time of day, after entering the time, click “Next” to continue. The user will then need to select “Send Message” to select the recipient and enter the message. For reference, this automation needs to be removed before the next day, otherwise it will happen again.

For a more advanced option that can be scheduled in a few days, a shortcut called Delayed Time iMessage by Jonathan Dodds includes several steps that calculate the time between the present and future date by sending a text message when that time has passed. After receiving the shortcut, it is added to the “My Shortcuts” tab, and when you click on it, the necessary information is requested. It only works with phone numbers, not email addresses. This shortcut is also displayed on the general sheet of the Photos application, so you can attach a photo to the message if you want. Whichever method is used, the Apple Shortcuts app is the best way to schedule iPhone text messages.

There are also a number of third-party apps that can schedule text messages on the iPhone. Among them is Scheduled, which allows users to schedule messages and emails. The app supports a number of platforms, including iMessage, WhatsApp, Messenger, Telegram and Slack. Users will have to grant the application access to their contact list and set a date and time for sending the message. The app comes with free and paid subscription plans. The free plan will send a reminder to send the scheduled text at a pre-determined time, and users will need to manually click “Send” to send it to the contact. The premium plan, priced at $4.99 per month, automatically sends texts at the scheduled time.

In addition to Scheduled, there are several other text message scheduling apps on the App Store, including Kyew, Reminderbase, Carrier Messaging, and AutoSender. Although all apps offer similar schedule options, the biggest drawback is that they charge for automatic text sending. Also, many of these apps do not work with the user’s phone number, but instead use a random cloud phone number, which means that recipients will not save this number in their contacts. Although the interface of these apps may be more convenient for scheduling text messages on the iPhone, they have some obvious drawbacks compared to the Shortcuts app.

Sylvester Stallone reacted to rumors that he and Jennifer Flavin are...