Home Entertainment How to register for World of Warcraft Dragonflight Alpha 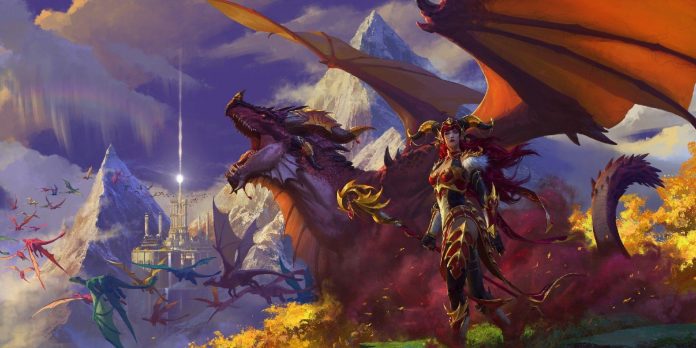 Blizzard Entertainment has announced that alpha testing of the Dragonflight expansion for World of Warcraft has already begun, and a select group of players are eligible to receive invitations to participate. The latest addition to Blizzard’s venerable MMORPG, Dragonflight, will bring new content to World of Warcraft, including new game classes and races, updated graphics and the ability to ride dragons. Dragonflight is currently scheduled to be released before the end of 2022, and fans hope it will give World of Warcraft a boost after allegations of abuse against Blizzard that have caused widespread outrage in the gaming community.
Unfortunately for WoW players, there is currently no way to get guaranteed access to the Dragonflight alpha test. In an official blog post announcing that alpha testing has been launched, Blizzard stated that their intention was to solicit feedback from “veterans of the community, the press, fan sites, friends and family,” rather than open the alpha version to anyone who would like to give WoW. the upcoming expansion is coming right now. This is sure to disappoint many players, especially those who have stayed in the game for years no matter what. Even those who have pre-ordered WoW: Dragonflight do not guarantee access at the moment.
Related: Everything new that will appear in World of Warcraft in Dragonflight
However, players can take several steps to try to improve their chances of accessing the alpha test by deciding to become a tester, which puts players in line to receive one of the invitations that will be sent out periodically during the testing period.
How to register for World of Warcraft: Alpha version of Dragonflight
The first thing players can do to try to get access to the alpha version of Dragonflight is to register on the official Blizzard website, which allows players to receive official updates and a chance to be selected for testing. Since the expansion is still in alpha testing, not all new content, including new changes in the development of the World of Warcraft plot, will be available. Notably, registration also allows players to participate in future beta tests, which could potentially be open to most of the community.
All the players have to do is visit the official website and click the button to subscribe. Blizzard also noted that they will only send invitations to accounts with an active WoW subscription or purchased game time, so players who have left Azeroth need to re-subscribe or buy game time to have a chance. Selected players will receive an email invitation allowing them to directly download the Dragonflight Alpha client via the Blizzard desktop app. Battle.net . Access to the alpha client can be obtained by selecting WoW in the client Battle.net and by selecting Dragonflight Alpha in the “Game Version” drop-down menu above the “Play” button.
Despite the new expansion, WoW is still designed for PC only, and console ports are not being developed, so players on console platforms have no access to Dragonflight or any WoW content. The limited availability of the alpha version for PC is a bit disappointing, but at least the selection also gives players good opportunities to participate in a potentially more advanced and complete Dragonflight game in beta later this year.

Brad Pitt in a linen skirt shows off tattoos on his...