Home Entertainment How to Install the public beta version of iOS 16 and try... 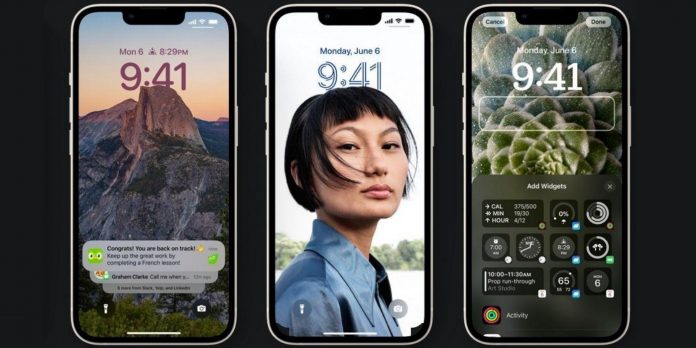 Apple released a public beta version of iOS 16 in July, allowing the first users to download and install it on their iPhones. The release took place a month after Apple’s Worldwide Developers Conference (WWDC) in June, at which the company launched the first beta version of iOS 16 for developers. worth $100 a year. Beta versions for developers also usually contain more bugs and are unstable than public beta versions, and therefore are not recommended for everyday use.
Apple launched the second beta version of iOS 16 for developers at the end of June, and the third beta version for developers was released in early July. The first stable version of iOS 16 is expected to be released this fall, although the exact date remains a mystery. The software is compatible with a variety of iPhones, starting with the iPhone 8, 8 Plus and iPhone X, which were released in 2017. However, it will not be available for iPhone 7 and 7 Plus, which angered many iPhone 7-series users who decided to express their frustration online.
Related: First Impressions of iOS 16: What Works and What Needs to be Improved
The first public beta version of iOS 16 is a free update, and it’s relatively easy to download and install on compatible iPhones. The first step to this is registration in the Apple Beta Software program. However, before doing this, it is advisable to make a backup copy of all the data in the device, especially if it contains important documents, photos and other files. By default, the iPhone periodically automatically backs up data to iCloud, but if this feature is disabled, users can still create backups of their devices manually. To do this, go to Settings, click the profile name, select iCloud, and then click iCloud Backup. Finally, click “Backup now” to create a backup of all the data on this device. How long the backup process will take will depend on the amount of data that needs to be copied and the speed of the Internet.
Download and install the public beta version of iOS 16
To start the installation, go to the Apple Beta Software Program website (download link in the source below) on the target iPhone and click the blue “Register” button. Now log in to Apple ID using the Face ID attached to the iPhone. On the next page, scroll down a bit and in the “Getting Started” section, click “Register an iOS device”. On the next page, scroll down and find the “Install Profile” section. Read the literature carefully here, and then click the blue “Upload profile” button. After the download is complete, click Install, enter your password, and follow the on-screen instructions. Users may have to click “Install” a couple more times before installing the file. Now restart your phone to prepare it to download the public beta version of iOS 16.
Once the phone boots up again, open the Settings app, go to General, then select Software Update. On the next page, iOS 16 will be ready to download, so just click the Download and Install button to get started. Please note that the phone requires a certain amount of free storage space to download a new update, so users should make sure they have enough free space before trying to download a new update. After the download is complete, restart the iPhone, and the next time the device boots, it should launch iOS 16.

Dr. Doom presents a new version of the “Hulkbuster Armor”